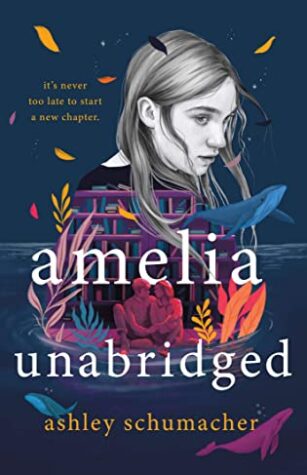 Sparks fly between two teens as they grapple with grief, love, and the future in this unforgettable debut novel sure to entice fans of Jandy Nelson and Jennifer E. Smith
Eighteen-year-old Amelia Griffin is obsessed with the famous Orman Chronicles, written by the young and reclusive prodigy N. E. Endsley. They’re the books that brought her and her best friend Jenna together after Amelia’s father left and her family imploded. So when Amelia and Jenna get the opportunity to attend a book festival with Endsley in attendance, Amelia is ecstatic. It’s the perfect way to start off their last summer before college.
In a heartbeat, everything goes horribly wrong. When Jenna gets a chance to meet the author and Amelia doesn’t, the two have a blowout fight like they’ve never experienced. And before Amelia has a chance to mend things, Jenna is killed in a freak car accident. Grief-stricken, and without her best friend to guide her, Amelia questions everything she had planned for the future.
When a mysterious, rare edition of the Orman Chronicles arrives, Amelia is convinced that it somehow came from Jenna. Tracking the book to an obscure but enchanting bookstore in Michigan, Amelia is shocked to find herself face-to-face with the enigmatic and handsome N. E. Endsley himself, the reason for Amelia’s and Jenna’s fight and perhaps the clue to what Jenna wanted to tell her all along.
Ashley Schumacher's devastating and beautiful debut, Amelia Unabridged, is about finding hope and strength within yourself, and maybe, just maybe, falling in love while you do it.

But Amelia Unabridged left me cross. Annoyed. And while I wish I had only wonderful things to say about Ashley Schumacher’s debut Young Adult contemporary novel, I just don’t.

Eighteen-year-old Amelia Griffin is infatuated with N. E. Endsley’s best-selling novels, The Orman Chronicles. They have been her lifeline, her anchor, ever since she first discovered them years ago, on the same day she met her best friend, Jenna.

As a high school graduation gift from Jenna’s parents, the girls attend a book festival with Endsley as the headliner. But when Jenna meets the author without Amelia, the two friends have a horrible fight. And then shortly thereafter, Jenna is killed in a tragic car accident, without Amelia ever having an opportunity to patch their relationship. Lost and drowning in grief, Amelia begins to doubt her future plans – the future that Jenna so perfectly mapped out for her.

But then a rare edition of The Orman Chronicles mysteriously arrives for Amelia. With no sender listed, she is convinced it somehow came from Jenna. After tracking the book to a small bookstore in Michigan, she hops on a plane, determined to learn exactly how the rare edition came to be in her possession.

Inside the bookstore, however, Amelia finds much more than she expected – none other than Endsley himself. And she instantly knows that he is the keeper of all the answers for which she has been searching.

So that I may first give credit where it is due, allow me to set aside my annoyance with Amelia Unabridged for a minute. Because the novel is certainly not horrible. It’s far from it.

At times, it is a beautiful story of grief, guilt, and regret. The first few chapters are especially sharp and poignant, as we are given great insight into the sisterly nature of Amelia and Jenna’s friendship. Jenna’s death hits hard. It’s a gut punch.

And for the most part, the novel is also an effective and empowering coming-of-age tale. Amelia has spent most of her teenage years allowing others to set her path. To control her course. And Amelia now knows she must stand up and decide, for herself, the direction of her life.

But then Amelia meets Endsley. And quite abruptly, Amelia Unabridged loses sight of its own beauty and becomes nothing more than an insta-love romance. The googly eyes, the tender face caresses, the sunshine smiles – I couldn’t buy into any of it.

It is at this point, too, that Schumacher’s writing takes a disappointing turn. Suddenly, her previously spare and lovely prose feels weighted down with overdone, sometimes nonsensical metaphors. Clever winds blow, invisible threads pull, and whales swim in the air – constantly. It’s as if the same awful joke is being repeated, time and time again.

Of particular irritation were the whales. I never got the point of them, no matter how many times I reread the passages in which they appeared. And Schumacher’s brief explanation of their meaning at novel’s end did nothing to soothe my exasperation.

Sigh. I was so over the whales.

Even more irritating than the insta love and whales, though, is the slightly off-kilter message that the ending of Amelia Unabridged sends. From a feministic perspective, it is not as progressive as I had hoped it would be, and I’m unsure as to whether Amelia truly accomplishes what she originally sets out to do. Instead of totally breaking free from the influence of others, it seems to me she simply trades control and manipulation for more control and manipulation, only wrapped in a prettier bow.

But again, this is my annoyed, middle-aged, grumpy opinion. Take it for what little it is likely worth.

If you’re a fan of YA contemporaries, by all means, still give Amelia Unabridged a go. My crankiness with the novel makes me a lonely outlier.

And just because I found fault with it doesn’t mean you will.

My sincerest appreciation to Ashley Schumacher, Wednesday Books, and NetGalley for the Advance Review Copy. All opinions included herein are my own.