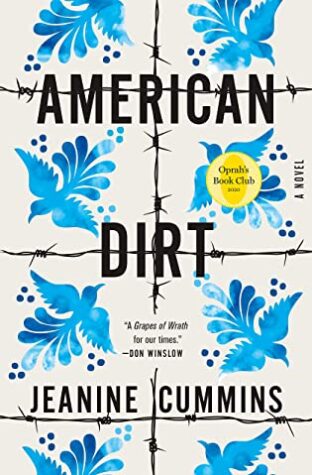 También de este lado hay sueños. On this side, too, there are dreams.
Lydia Quixano Pérez lives in the Mexican city of Acapulco. She runs a bookstore. She has a son, Luca, the love of her life, and a wonderful husband who is a journalist. And while there are cracks beginning to show in Acapulco because of the drug cartels, her life is, by and large, fairly comfortable.
Even though she knows they’ll never sell, Lydia stocks some of her all-time favorite books in her store. And then one day a man enters the shop to browse and comes up to the register with a few books he would like to buy—two of them her favorites. Javier is erudite. He is charming. And, unbeknownst to Lydia, he is the jefe of the newest drug cartel that has gruesomely taken over the city. When Lydia’s husband’s tell-all profile of Javier is published, none of their lives will ever be the same.
Forced to flee, Lydia and eight-year-old Luca soon find themselves miles and worlds away from their comfortable middle-class existence. Instantly transformed into migrants, Lydia and Luca ride la bestia—trains that make their way north toward the United States, which is the only place Javier’s reach doesn’t extend. As they join the countless people trying to reach el norte, Lydia soon sees that everyone is running from something. But what exactly are they running to?

My mind has been hard at work the past two days.

It has been relentlessly spinning, attempting to organize all of my many, many, MANY thoughts about American Dirt. I have spent the last five days fully immersed in this novel, and I have much to say.

With American Dirt being so steeped in controversy, I had originally believed I would simply read and rate it. Keep my mouth shut. It would be, by far, the safest, most non-controversial course of action to take.

Aagh! But I can’t do it. My feelings about the book are too strong to be silenced. I must share them, for better or for worse.

American Dirt follows the plight of Lydia Quixano Perez and her eight-year-old son, Luca, as they desperately flee Acapulco after surviving a violent shooting that murders their entire family. Fearing that she and Luca will continue to be hunted down by the cartel’s jefe, Lydia decides that their only hope is to leave Mexico by way of La Bestia, the migrant trains that travel north toward the States.

Anyone who knows anything about this book knows how harshly it and the author, Jeanine Cummins, have been criticized by some. I’ve read the critiques and the “essays.” I’ve examined the negativity. And while I will not reiterate and give further voice to that negativity, I will instead offer up my own thoughts.

To begin, I don’t believe that anyone “owns” stories. Since the beginning of time, writers have basically been telling the stories of others. Some of the stories are true, while others are fictional, made up. It’s what writers do. And simply put, this is what Cummins does with this novel — she tells a fictional, made up story that gives the reader insight into the plight of Mexican migrants.

Please don’t misunderstand — I appreciate and totally get the importance of the #OwnVoices movement. Reading a novel written by an #OwnVoices author can provide an intimacy to a story that other writers may fail to achieve. The stories are deeply emotional and authentic; more visceral. We desperately need more of these stories.

But if we subscribe to the belief that stories are “owned” and that writers should only write about what they personally know and have personally experienced in their own lives — if we then strip that argument down to the barest of bones — that would mean J.R.R. Tolkien could never have written Lord of the Rings. There would be no Gone with the Wind. No Count of Monte Cristo. No 1984. None of the authors of these novels personally experienced the stories they so brilliantly told.

J.K. Rowling would never have brought to life a young wizard by the name of Harry Potter. (Gasp! Can you seriously imagine a world without Harry? I can’t.)

But seriously, think about it.

Other people shouldn’t have the ability to limit and dictate what writers can write. And writers shouldn’t be punished for their stories either. An author should be able to tell whatever story he or she chooses, as long as the proper research, care, and sensitivity have been given to the narrative.

The writing is excellent. The narrative is intense and compelling. Emotion emanates from the pages.

The novel is not perfect, though. The story has its fair share of melodrama and is at times slightly overwritten. And the various obstacles Lydia and Luca face on their journey are often too conveniently resolved.

But American Dirt is a novel that should be read — and deserves to be read.

So, read it. Make up your own mind. And even if you find that you agree with the criticism after you read it, at least you will have decided for yourself.

But also, please read it with an open mind, with a mind that isn’t already made up by preconceived notions, and the thoughts and words of others.

That’s all I ask.

And I think that is one of the most important responsibilities that we, as readers, bear, and of which we should never lose sight — to always read with our minds . . . and hearts . . . open.