At the Edge of the Haight 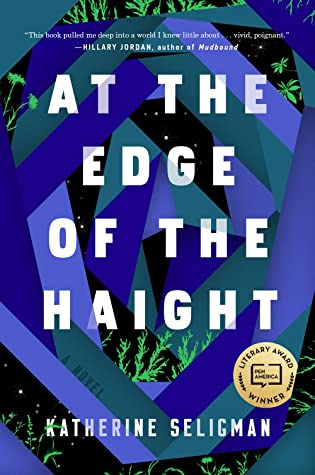 At the Edge of the Haight by Katherine Seligman
Published by Algonquin Books on January 19, 2021
Pages: 304
View Title on Goodreads
Bantering Books Rating:

The Winner of the 2019 PEN/Bellwether Prize for Socially Engaged Fiction
Maddy Donaldo, homeless at twenty, has made a family of sorts in the dangerous spaces of San Francisco’s Golden Gate Park. She knows whom to trust, where to eat, when to move locations, and how to take care of her dog. It’s the only home she has. When she unwittingly witnesses the murder of a young homeless boy and is seen by the perpetrator, her relatively stable life is upended. Suddenly, everyone from the police to the dead boys’ parents want to talk to Maddy about what she saw. As adults pressure her to give up her secrets and reunite with her own family before she meets a similar fate, Maddy must decide whether she wants to stay lost or be found. Against the backdrop of a radically changing San Francisco, a city which embraces a booming tech economy while struggling to maintain its culture of tolerance, At the Edge of the Haight follows the lives of those who depend on makeshift homes and communities.
As judge Hillary Jordan says, “This book pulled me deep into a world I knew little about, bringing the struggles of its young, homeless inhabitants—the kind of people we avoid eye contact with on the street—to vivid, poignant life. The novel demands that you take a close look. If you knew, could you still ignore, fear, or condemn them? And knowing, how can you ever forget?”

Welp, I can’t love them all.

Bringing to the forefront the daily struggles of the homeless population, Katherine Seligman’s award-winning novel, At the Edge of the Haight, transports us into a world about which many of us know little.

Without a home at the age of 20, Maddy Donaldo has carved a life for herself while living inside San Francisco’s Golden Gate Park. She has her own community, composed of a close group of friends and a dog named Root. She knows where to eat, where to bathe, and how to avoid the cops.

Maddy knows how to live homelessly. And she lives contentedly.

Until her quiet life is shaken one day when chasing after Root. To her horror, Maddy stumbles upon the scene of a murdered homeless boy – and into the path of the suspected murderer. With the police and victim’s family asking for her help, Maddy soon finds that she just wants to be left alone. More than she ever did before.

Feeling pressure from all sides to now contact her own family, Maddy must decide whether she has the courage to change her life. Before she meets a similar end to that of the murdered homeless boy.

At the Edge of the Haight is the winner of the 2019 PEN/Bellwether Prize for Socially Engaged Fiction. And even though it is not a novel that I particularly enjoyed, in some ways I can see why it was selected.

Seligman has most certainly done her research into the lives of the unsheltered. She has given an honest and distinctive voice to Maddy, and she drops the reader squarely into the midst of her mind. We are given great insight into the thought processes of a young homeless woman, and Maddy’s troubled psyche feels authentic.

But research and authenticity are not enough to carry a novel. And what At the Edge of the Haight lacks most is solid execution. The writing, the characterization, the storytelling – they are all quite subpar and lackluster.

The prose is extremely simplistic, rough, and choppy. There is no flow to it; the words do not glide fluidly across the page. And while the novel has been labeled Adult Fiction, I believe it is much better suited to the Young Adult genre.

Aside from Maddy, all the other characters are flat and one-dimensional. We only see what is on the surface. No depth or nuance is given to anyone. The dialogue between them, too, is stilted and forced. And occasionally, it’s as if there are holes in conversations, or missing lines and thought patterns.

In terms of storytelling, the narrative jolts from one event to the next, never smoothly transitioning between scenes and chapters. The murder mystery is also not threaded effectively across the breadth of the story, and some of the novel’s plot points seem random and too convenient.

It’s almost as if Seligman tries to forcibly bend the story to fit her research, rather than allowing the story to breathe, grow naturally, and expand with her knowledge.

Truly, it saddens me that I am unable to lavishly praise At the Edge of the Haight. I recognize the amount of research that Seligman conducted in order to write it. I sense how much heart she put into the story.

But unfortunately, my heart was not in it. I was neither emotionally invested nor ever fully engaged in the novel. And I, therefore, cannot recommend it.

My sincerest appreciation to Algonquin Books and Edelweiss+ for the Advance Review Copy. All opinions included herein are my own.