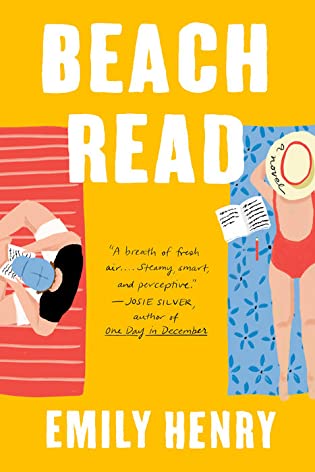 A romance writer who no longer believes in love and a literary writer stuck in a rut engage in a summer-long challenge that may just upend everything they believe about happily ever afters.
Augustus Everett is an acclaimed author of literary fiction. January Andrews writes bestselling romance. When she pens a happily ever after, he kills off his entire cast.
They're polar opposites.
In fact, the only thing they have in common is that for the next three months, they're living in neighboring beach houses, broke, and bogged down with writer's block.
Until, one hazy evening, one thing leads to another and they strike a deal designed to force them out of their creative ruts: Augustus will spend the summer writing something happy, and January will pen the next Great American Novel. She'll take him on field trips worthy of any rom-com montage, and he'll take her to interview surviving members of a backwoods death cult (obviously). Everyone will finish a book and no one will fall in love. Really.

Good grief! What is wrong with me?!?! I’ve tried writing this review twice now and can’t seem to express my thoughts properly. So, I will try it again . . . a third time . . . from scratch.

Hmm. Let’s hope I’m not suffering from my own case of writer’s block, similar to that of January and Gus, the two main protagonists in Emily Henry’s new novel, Beach Read.

Darn you, Beach Read! You better not have jinxed me!

(But I am seriously a little bit worried.)

January and Gus are two successful authors, living in adjacent houses on the beach for the summer. January writes romance novels. Gus writes literary fiction. They both have looming deadlines before them, and both, unfortunately, are suffering from a severe case of writer’s block.

What do they do? In an attempt to break through their respective blocks, January and Gus agree to a challenge. January will write a dark, depressing literary novel. Gus will write a happy ending. And they will spend the summer teaching each other the secrets of their craft.

Oh! They also agree to NOT fall in love. Or at least, January does. But we all know how that goes, don’t we?

Heading into Beach Read, I assumed I was in store for a fun, summery, light-hearted romantic comedy. I was ready for it. So excited for it. I mean, just look at that cover! Covers don’t get much more summery than this one.

Starting out, however, the story of January and Gus is a bit more complex than one would expect. January is reeling from the unexpected death of her father and the recent discovery of his betrayal to her mother. Gus also has some serious demons of his own. And, of course, they both are under major stress from book deadlines and writer’s block.

And this is where a bit of confusion begins to set in for me. Because to me, the first third (maybe half?) of the story reads like a slightly more serious women’s fiction novel, rather than a rom com. Henry seems to be focused on writing a story about novel writing, writer’s block, grief, and betrayal.

Don’t get me wrong — the story still has plenty of humor and romance. But underlying all the rom com fun and games, Henry tells a deeper, more intricate story about love and relationships — and WRITING! It’s all so interesting.

But then something happens. Something changes.

The focus of Beach Read suddenly shifts. The story is no longer weighty and complex; it’s instead all about the romance of January and Gus. It’s light and fluffy and summery.

Writer’s blocks are miraculously broken and then forgotten. Books are easily finished and sold without any witness to the reactions of agents and publishers. Grief is forgotten, and forgiveness is suddenly given.

And just like that — Beach Read turns into another simple, run-of-the-mill romantic comedy.

What happened? Why the complete 180? I’m not certain. But I feel as if Henry lost her focus. Or maybe became confused about what type of story she wanted to tell.

Either way, I think she lost the story.

And because of that, she lost a little bit of my love for it, too.

Nevertheless, as far as romantic comedies go, Beach Read isn’t bad. January and Gus are likable enough characters, with Gus being the more appealing of the two. Henry writes January with a bit of a heavy hand, I think, and tries TOO hard to make her seem clever, witty, and snarky — to the point of annoyance.

Henry’s style of writing is enjoyable, for the most part, and her words flow smoothly across the page. She does sometimes slip into repetitive phrasing, however, which can be a bit tiring. (For a while there, I thought I had just about hit my limit of reading about clavicles being grazed and twitching corners of crooked mouths.)

Beach Read does have its fair share of warm, humorous moments, too. Some of which are even laugh-out-loud funny.

And I must say, the sparks do certainly fly between January and Gus. The chemistry between the two characters is sexy, and it’s almost impossible to not hope for a happily ever after.

So, if you’re in the mood for a summery romance, do not hesitate to give Beach Read a whirl. It IS fun, and I think most rom com fans will enjoy it.

Just don’t get your hopes up for much more than that. If you do, you may end up disappointed.

And hey . . . would you look at that? My words came back. I guess the third draft is the charm, after all.

I received an Advanced Readers Copy from Edelweiss and Berkley/Penguin Publishing Group. All opinions included herein are my own.