Black Sun (Between Earth and Sky, #1) 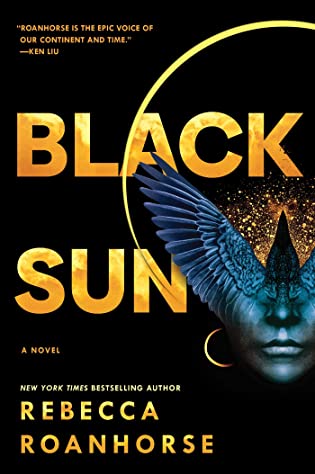 From the New York Times bestselling author of Star Wars: Resistance Reborn comes the first book in the Between Earth and Sky trilogy, inspired by the civilizations of the Pre-Columbian Americas and woven into a tale of celestial prophecies, political intrigue, and forbidden magic.
A god will returnWhen the earth and sky convergeUnder the black sun
In the holy city of Tova, the winter solstice is usually a time for celebration and renewal, but this year it coincides with a solar eclipse, a rare celestial event proscribed by the Sun Priest as an unbalancing of the world.
Meanwhile, a ship launches from a distant city bound for Tova and set to arrive on the solstice. The captain of the ship, Xiala, is a disgraced Teek whose song can calm the waters around her as easily as it can warp a man’s mind. Her ship carries one passenger. Described as harmless, the passenger, Serapio, is a young man, blind, scarred, and cloaked in destiny. As Xiala well knows, when a man is described as harmless, he usually ends up being a villain.
Crafted with unforgettable characters, Rebecca Roanhorse has created an epic adventure exploring the decadence of power amidst the weight of history and the struggle of individuals swimming against the confines of society and their broken pasts in the most original series debut of the decade.

Epic fantasy fans – rejoice! Get ready to shout from your rooftops and jump for joy.

Because Rebecca Roanhorse has given us a gift. A magical and wondrous gift. Black Sun, the first book in the Between Earth and Sky trilogy, is FANTASTIC.

On the continent of Meridian lies the holy city of Tova, home to the Watchers and the Sky Made clans, where celebrations for the winter solstice are drawing near. This year, however, the timing of the solstice runs concurrently with a solar eclipse, which will disrupt the delicate balance of the world, according to the warnings of the Sun Priest, Naranpa.

In the city of Cuecola, a ship captained by Xiala, a magical Teek who can sing the wills of both water and men into submission, departs for Tova. Her ship’s cargo? Serapio, a blind man who, like Xiala, is shrouded in tales of superstition. Xiala has but one task – provide Serapio safe and timely passage to Tova by the winter solstice. No delays. No detours. And no questions asked.

For a minute, I considered keeping this review short and sweet. I thought that I would write no more than a few raving sentences about how much I adored Black Sun and then simply tell everyone to read it, read it, read it. But I then realized what a disservice that would be to Roanhorse and the novel. She, and the book, certainly deserve more than a few fan-girlish, delirious sentences.

For Black Sun is superb. It is the most epic of epic fantasy. And it deserves every ounce of its fervent hype.

The story has something for everyone. It’s filled with sea adventure, culture, history, political intrigue, and romance. (A bit of a rushed romance, but that’s a minor quibble.) There are gods and celestial prophecies. Magic of the earth, sea, sky, and blood. Characters that are diverse in gender and sexual orientation.

And the world-building is phenomenal. Set in a land inspired by the pre-Columbian cultures of the Americas, Roanhorse has crafted a lush and exotic fantastical world. The architecture, food, scents, clothing, climate, and landscapes of the Meridian cities are all vividly created, fully enveloping the senses. I am in awe of the breadth of Roanhorse’s imagination.

There is little, if any, info-dumping, too. The intricacies of the world are organically revealed as the novel progresses, without its complexity ever feeling overwhelming or intimidating. Roanhorse’s writing is also accessible and clear, which is helpful and aids the reader’s understanding of Meridian’s inner workings.

But the world-building isn’t the only reason why Black Sun is so effective. Roanhorse has put considerable time and effort into sculpting her characters, creating memorable protagonists who tug at our emotions. The story is told through the multiple points of view of Xiala, Serapio, Naranpa (the Sun Priest), and Okoa (of clan Carrion Crow) – and all four characters are extremely likeable and sympathetic.

Scratch that. To clarify, they are likeable and sympathetic enough, at least, to allow us to be fully invested in each of them as individuals.

Overall, Xiala and Okoa are the most endearing, even though they are the two characters that left me a bit wanting. Their backstories are a little vague — (perhaps, intentionally so?) — and I wanted to know more. I have a hunch, though, that their personal histories will be fleshed out a little further in the second book. Or that is my hope.

Naranpa is the least appealing of the four leads, as she is often a bit uptight and inflexible. But as the novel evolves, so does our appreciation of her plight and character growth.

And Serapio is, by far, the most complicated and nuanced of the foursome. Is he a hero? Or a villain? We do not know. And like Xiala, I struggled with my own feelings towards him and at times questioned the empathy he stirred within my heart. The dark path he is set upon is not of his own choosing, to be sure. Yet what of his free will?!?! Is it not ultimately his choice whether to follow the path?

Regarding pace, I feel I should mention that the first half of the novel moves noticeably slower than the second. The latter half is more intense, with swift and frequent action, all of which leads to a riveting conclusion. The three separate narrative threads (I say three, not four, because Xiala and Serapio’s narrative arcs are so tightly intertwined) come together ingeniously by novel’s end, and the stage is beautifully set for the second installment.

And I honestly do not know what I will do with myself while I impatiently await the next book in the trilogy.

But I strongly suspect they will be starkly eclipsed by the brilliance of Black Sun.

My sincerest appreciation to Saga Press and NetGalley for the Advance Review Copy. All opinions included herein are my own.