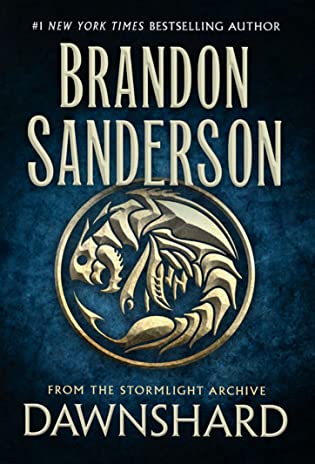 From Brandon Sanderson author of the #1 New York Times bestselling Stormlight Archive and its fourth massive installment, Rhythm of War—comes a new hefty novella, Dawnshard. Taking place between Oathbringer and Rhythm of War, this tale (like Edgedancer before it) gives often-overshadowed characters their own chance to shine.
When a ghost ship is discovered, its crew presumed dead after trying to reach the storm-shrouded island Akinah, Navani Kholin must send an expedition to make sure the island hasn't fallen into enemy hands. Knights Radiant who fly too near find their Stormlight suddenly drained, so the voyage must be by sea.
Shipowner Rysn Ftori lost the use of her legs but gained the companionship of Chiri-Chiri, a Stormlight-ingesting winged larkin, a species once thought extinct. Now Rysn's pet is ill, and any hope for Chiri-Chiri’s recovery can be found only at the ancestral home of the larkin: Akinah. With the help of Lopen, the formerly one-armed Windrunner, Rysn must accept Navani's quest and sail into the perilous storm from which no one has returned alive. If the crew cannot uncover the secrets of the hidden island city before the wrath of its ancient guardians falls upon them, the fate of Roshar and the entire Cosmere hangs in the balance.

Aahh. It feels great to be back in Roshar – even for just a quick trip.

Dawnshard is a short, highly-entertaining novella in Brandon Sanderson’s epic fantasy series, The Stormlight Archive. Set between Oathbringer and Rhythm of War, the story stars the always-entertaining Windrunner, Lopen, and Rysn, now a shipowner, as they are sent by sea to investigate the hidden secrets of the remote island of Akinah.

The novella is a terrific warm-up for Rhythm of War. It’s been three years since Oathbringer was published, and Dawnshard dips our toes back into Roshar. It gives us a feel for the world again, allowing us to reacquaint ourselves with a few of our beloved characters.

The story is exciting and the pages fly by quickly. Lopen and Rysn make for compelling leads, and we are treated to a full dose of Lopen’s signature sense of humor, of which I never tire. It’s such a fun read.

Dawnshard is also a perfect example of why I believe Sanderson is one of the greatest storytellers we have today. He packs so much into a mere 200 pages and makes it seem easy, without ever sacrificing reader enjoyment, world-building, character development, or plot. And he does all this while telling a uniquely creative tale that provides yet another piece of the massive, intricate puzzle that is The Stormlight Archive.

Stormlight fans – be sure to read Dawnshard before diving into Rhythm of War. You will not want to skip it.