How the Penguins Saved Veronica 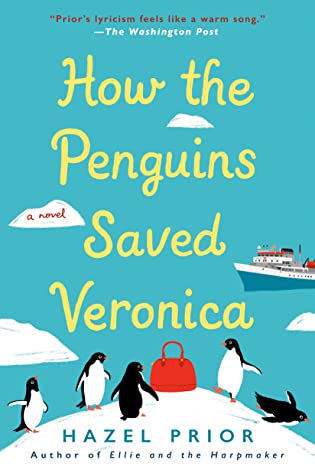 How the Penguins Saved Veronica by Hazel Prior
Published by Berkley on June 16, 2020
Pages: 368
View Title on Goodreads
Bantering Books Rating:

A curmudgeonly but charming old woman, her estranged grandson, and a colony of penguins proves it's never too late to be the person you want to be in this rich, heartwarming story from the acclaimed author of Ellie and the Harpmaker.
Eighty-five-year-old Veronica McCreedy is estranged from her family and wants to find a worthwhile cause to leave her fortune to. When she sees a documentary about penguins being studied in Antarctica, she tells the scientists she’s coming to visit—and won’t take no for an answer. Shortly after arriving, she convinces the reluctant team to rescue an orphaned baby penguin. He becomes part of life at the base, and Veronica's closed heart starts to open.
Her grandson, Patrick, comes to Antarctica to make one last attempt to get to know his grandmother. Together, Veronica, Patrick, and even the scientists learn what family, love, and connection are all about.

I just can’t get over all the penguin cuteness in Hazel Prior’s new novel, How the Penguins Saved Veronica. OMG.

I think I want one. My very own penguin, I mean. I can just see her now, waddling around the house. A perfect little black-and-white weeble wobble dressed in a tuxedo.

I know! I know! A pet penguin named Petunia is not very realistic. (Perfect name, right?) But hey, a girl can dream.

And I am not the only girl to dream about penguins. Our dear Veronica has penguin dreams of her own.

Veronica McCreedy, at age 85, spends her days mostly alone, in her mansion in Scotland by the sea. She has no family. No friends. The only human interaction Veronica has in her life is with her personal assistant, Eileen, and a gardener who tends to the grounds of her mansion. She is the quintessential lonely, grumpy curmudgeon.

Recognizing that she is nearing the end of her life, Veronica begins to wonder what she should do with her amassed fortune upon her passing, seeing as she has no real legacy to which she can leave it. Acting on a hunch, and with Eileen’s help, she researches her ancestral lineage and surprisingly learns that she has an adult grandson named Patrick.

Veronica and Patrick soon meet, and unfortunately, the two do not take a liking to one another. Expectations are not met, and intentions are misunderstood. Their parting is laced with mutual disappointment.

Still searching for an appropriate beneficiary for her fortune, Veronica stumbles upon a television show about penguins one night – and falls head over heels for the pint-sized feathered friends. Quicker than a blink, she books a trip to a penguin research center in Antarctica in order to learn all about the adorable creatures. And off goes Veronica to Antarctica, on an adventure of a lifetime.

I must say, How the Penguins Saved Veronica is an absolute delight. It’s charming. It’s heartwarming. It’s inspirational. Prior has written a beautiful story with a nice environmental message – a story that most readers will appreciate.

And the writing, itself, is to die for. The novel is elegantly written; Prior’s prose is gorgeous. Every word is a joy to read.

The characterization of the two main protagonists of the novel is fabulous, too. Prior has drawn both Veronica and Patrick so well, and their personalities leap off the page.

Veronica, for all her cranky sullenness, is extremely likable. She is stubborn, feisty, and does not suffer fools gladly. I felt such affection for her, almost instantaneously. And over the course of the narrative, Prior skillfully allows the reader to know Veronica deeply and understand the reasons for her gruff exterior. Veronica’s life story is quite poignant, and it is no wonder she has built such walls around her icy heart.

And Patrick – so lovable and oh-so-clueless. He just sort of ambles aimlessly in the world, smoking marijuana, without any direction or real sense of purpose. He hasn’t had the best life, up to this point, and he is a creature of his unfortunate upbringing. But he’s kindhearted and strives to do right. It’s impossible to not root for him. (Not to mention the fact that Patrick is hysterical, in a Joey Tribbiani from Friends sort of way. I swear, Matt LeBlanc was in my head the entire time.)

The only criticism I have to offer regarding How the Penguins Saved Veronica is fairly minor, in nature. And it’s that I think the story would have benefited from Prior fleshing out the secondary characters a bit further, namely the three penguin researchers in Antarctica. All three play important roles in the story and knowing each of them a bit more would’ve further rounded out the novel.

Small critique aside, How the Penguins Saved Veronica is a treasure. I feel as if I’ve stumbled upon a pot of gold, for having read it. It’s so wonderful.

You should run, run, run to the nearest bookstore to pick up your own copy.

*A note for animal lovers: There is one brief scene of bird-on-penguin violence that may be disturbing.

I received an Advanced Readers Copy from Edelweiss and Berkley.  All opinions included herein are my own.