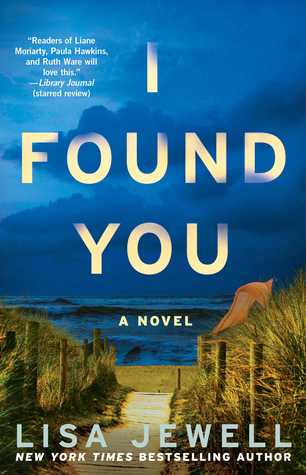 I Found You by Lisa Jewell
Published by Atria Books on March 6, 2018
Pages: 352
View Title on Goodreads
Bantering Books Rating:

“Readers of Liane Moriarty, Paula Hawkins, and Ruth Ware will love.” —Library Journal (starred review)
“Jewell’s novel explores the space between going missing and being lost….how the plots intersect and finally collide is one of the great thrills of reading Jewell’s book. She ratchets up the tension masterfully, and her writing is lively.” —The New York Times
In the windswept British seaside town of Ridinghouse Bay, single mom Alice Lake finds a man sitting on a beach outside her house. He has no name, no jacket, and no idea how he got there. Against her better judgment, she invites him inside.
Meanwhile, in a suburb of London, newlywed Lily Monrose grows anxious when her husband fails to return home from work one night. Soon, she receives even worse news: according to the police, the man she married never even existed.
Twenty-three years earlier, Gray and Kirsty Ross are teenagers on a summer holiday with their parents. The annual trip to Ridinghouse Bay is uneventful, until an enigmatic young man starts paying extra attention to Kirsty. Something about him makes Gray uncomfortable—and it’s not just because he’s a protective older brother.
Who is the man on the beach? Where is Lily’s missing husband? And what ever happened to the man who made such a lasting and disturbing impression on Gray?
“A mystery with substance” (Kirkus Reviews), I Found You is a delicious collision course of a novel, filled with the believable characters, stunning writing, and “surprising revelations all the way up to the ending” (Booklist) that make the New York Times bestselling author of Then She Was Gone Lisa Jewell so beloved by audiences on both sides of the Atlantic.

Hmm . . . I’m searching for the right word to describe how I feel about I Found You. And I think I’m going to go with . . . “underwhelmed.” Yeah, that feels right.

But I think I’m going to also add the word, “surprisingly,” in front of it.

I’ve read so many rave reviews for Lisa Jewell’s novels, and I’ve been looking forward to finally, one day, being able to read one of her books. In fact, I Found You has been loaded up on my Kindle, ready to go for quite awhile now. For a myriad of reasons, however, I just haven’t ever clicked it open. But my finger has finally tapped its gorgeous cover, and I can now say that I’ve read my first Jewell thriller.

And I liked it. But I only, surprisingly, just liked it.

Here’s the thing — I seriously struggle with thrillers where the forward movement of the plot relies heavily on the characters making not-very-smart, illogical decisions. Call it a pet peeve, if you will. But I kind of feel like it’s an easy way out for authors to write characters who consistently make wrong choices and then use the wrong choices as the driving force of the plot. I’ve read many intelligent, tightly written thrillers. I know that a thrilling story with smart characters can be told.

So when I’m reading along and constantly finding myself thinking things such as, “Wait! There’s no way a parent would do that” or “That decision just doesn’t make sense AT ALL,” then that means the story is problematic for me.

I Found You is centered around three separate story lines, told in alternating chapters:

We first meet Alice, a single mother of three children, who finds a random man sitting on the beach outside of her home and offers him a place to stay after she discovers he has no memory of who he is and how he came to the beach.

Next, we are introduced to Lily, who is a very young newlywed from Russia. She has only known her husband and been living in England for a few weeks before her husband mysteriously disappears.

And then we have Gray and Kirsty, a teenage brother and sister whose tragic story, told in the past, occurs while traveling with their family way back in 1993.

Okay — this is where the problems and illogical decisions begin.

First of all, I find it so incredibly hard to believe that Alice, a mother, would bring a strange man into her home and put her children at risk. The man could be a murderer, a con man, or a rapist. Or all three! Wouldn’t most moms do the complete opposite of what Alice did — and instead call the police?

But as a way to justify Alice’s actions, Jewell establishes early on that Alice has made some pretty awful parenting decisions in the past. This justification, however, only serves to make Alice’s actions even more unbelievable. I mean, at 41 years of age, I think she would’ve learned her lesson from her past mistakes.

Plus, Alice’s two older children even tell her that they are uncomfortable with the man living there and want him gone, and she STILL continues to allow him to stay. It’s unbelievable.

Secondly, Lily marries a foreigner after only knowing him a few weeks, and then leaves her family and country behind to live in England. She knows nothing of her husband’s past or his family or his life. NOTHING. Again — illogical and not very smart. I will admit that some slack and credibility may be given due to Lily being only 21 years-old. But still.

And lastly, the tragic trouble that Gray and Kirsty find themselves in is the direct result of their parents making horribly bad decisions and not protecting them. It’s very sad . . . and also, very unbelievable that their parents would behave the way that they do in the novel.

Furthermore, the overall story is a bit humdrum for my taste. It lacks any powerful moments of heart-stopping tension. The big twist, too, is not very surprising and fairly easy to figure out.

So . . . all of this adds up to me, struggling with I Found You and believing it to be just another average, standard, run-of-the-mill thriller.

With all that being said, however, a part of me still liked the book. It’s not terrible, by any means. It’s a quick, enjoyable read that, even with its flaws, still compelled me to turn the pages. It’s one that I would recommend — but only if you’re looking for a lighter thriller and willing to turn a blind eye in regard to the logicality of the actions of the characters.

And just so you know, I’m not giving up on Jewell either. I will most certainly give another one of her novels a try. Her writing style makes for a very easy, pleasing read . . . and sometimes, easy and pleasing is exactly what I need.

Here’s to hoping the next one lands more on the side of love, rather than like.