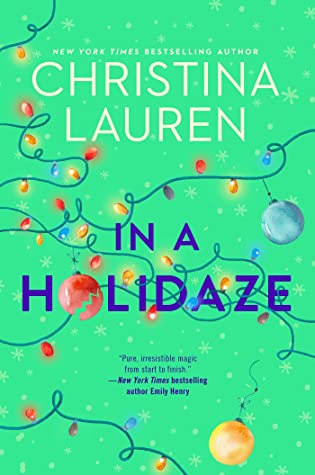 In a Holidaze by Christina Lauren
Published by Gallery Books on October 20, 2020
Pages: 336
View Title on Goodreads
Bantering Books Rating:

One Christmas wish, two brothers, and a lifetime of hope are on the line for hapless Maelyn Jones in In a Holidaze, the quintessential holiday romantic novel by Christina Lauren, the New York Times bestselling author of The Unhoneymooners..
It’s the most wonderful time of the year…but not for Maelyn Jones. She’s living with her parents, hates her going-nowhere job, and has just made a romantic error of epic proportions.
But perhaps worst of all, this is the last Christmas Mae will be at her favorite place in the world—the snowy Utah cabin where she and her family have spent every holiday since she was born, along with two other beloved families. Mentally melting down as she drives away from the cabin for the final time, Mae throws out what she thinks is a simple plea to the universe: Please. Show me what will make me happy.
The next thing she knows, tires screech and metal collides, everything goes black. But when Mae gasps awake…she’s on an airplane bound for Utah, where she begins the same holiday all over again. With one hilarious disaster after another sending her back to the plane, Mae must figure out how to break free of the strange time loop—and finally get her true love under the mistletoe.
Jam-packed with yuletide cheer, an unforgettable cast of characters, and Christina Lauren’s trademark “downright hilarious” (Helen Hoang, author of The Bride Test) hijinks, this swoon-worthy romantic read will make you believe in the power of wishes and the magic of the holidays.

Feeling a little bah humbug? Then I suggest you give Christina Lauren’s holiday romantic comedy, In a Holidaze, a try.

Because it will make you want to trim your Christmas tree. Deck your halls. Hang some mistletoe.

It is the fluffiest of fluffiest Christmas fluff. And every fluffy word of it is wonderfully delightful.

Maelyn Jones is stuck in a time loop. A Christmas time loop. Without any clue how to break it.

After having spent her last Christmas with her family at her friends’ cabin in Utah, Mae is distraught. She has lost her beloved cabin, and she has also made the biggest romantic mistake of her life.

She kissed the wrong Hollis brother. (Cringe.) Instead of kissing Andrew, her forever crush, she somehow managed to kiss his younger brother, Theo.

While driving away from the cabin with her family, Mae appeals silently to the universe: Please. Show me what will make me happy.

One unexpected car crash later, Mae awakens alongside her brother, Miles, back on an airplane to Utah. Mae soon realizes that she has been given a second chance to find true happiness and correct the course of her life.

But not only has Mae been awarded a second chance, she soon discovers that she has also been handed a third and a fourth chance. (And perhaps even a fifth . . . and a sixth . . . and a seventh. You get the picture.) Because one false move, one mistaken step off her path to happiness, and BAM! Back through time again she goes, to awaken once more, sitting next to Miles, on an airplane bound for Utah.

It quickly becomes clear to Mae that if she has any shot at breaking the time loop, she must, for the first time in her life, shed her fear and seize her happiness. She just hopes that the wants of her heart align with whatever the universe has in store for her.

I still don’t think I have fully come down from the holiday high that is In a Holidaze. My heart is overflowing with yuletide cheer. I cannot seem to wipe the happy smile from my face. And I now have this sudden inexplicable urge to watch cheesy, romantic Christmas movies of the popular Hallmark variety. (Those who know me well will attest to the fact that this is quite the abnormal behavior for me.)

Yes. The dynamic writing duo of Christina Hobbs and Lauren Billings (aka Christina Lauren) has written a fun and romantic tale filled with lovable characters that is sure to melt the Scroogiest of hearts.

And it’s hysterical. It’s laugh-out-loud funny. The situations that Mae finds herself in are hilariously relatable, and the novel is packed with brilliantly witty and amusing dialogue. Some of the scenes are even so perfectly and comedically written that I could envision them up on the silver screen, in next year’s hit holiday rom-com.

I was struck, too, by the ease of Lauren’s writing. It is refreshingly accessible and flows smoothly on the page, making the novel a very quick read. The dialogue is also extremely natural, and the characters’ banter never feels forced or wooden.

But no matter how much I adored In a Holidaze, I must admit that the novel noticeably stumbles in one regard – and that is, the characterization of Andrew. I always felt like I was struggling to get an accurate read on him because his personality and actions are a little flip floppy. There are times he comes across as Mr. Dream Guy, but then there are other times where he seems like he’s only out to get a little somethin’-somethin’. It’s a bit confusing.

And I wonder if the lack of cohesion regarding Andrew’s characterization is symptomatic of having two authors behind the Lauren tag team – a hole in their otherwise seamless dual writing. Maybe? Perhaps?

One other teeny tiny, snowflake-sized complaint – the novel has a lot of characters. One entire family too many, in my opinion. It’s not easy to keep straight who is who, and all the names constantly felt jumbled in my mind.

By no means, though, should my criticisms stop you from doing whatever it takes to get your hands on In a Holidaze. The novel is so joyful. So heartwarming. So filled with laughter and starry-eyed Christmas romance.

Hurry. Grab it. Before the holiday season passes you by.

And you never know. Not only will In a Holidaze put you in the mood to hang some mistletoe . . . it just might nudge you to stand under it, too. ?