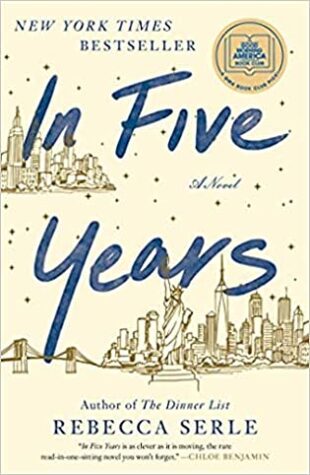 Where do you see yourself in five years?
When Type-A Manhattan lawyer Dannie Cohan is asked this question at the most important interview of her career, she has a meticulously crafted answer at the ready. Later, after nailing her interview and accepting her boyfriend's marriage proposal, Dannie goes to sleep knowing she is right on track to achieve her five-year plan.
But when she wakes up, she’s suddenly in a different apartment, with a different ring on her finger, and beside a very different man. The television news is on in the background, and she can just make out the scrolling date. It’s the same night—December 15—but 2025, five years in the future.
After a very intense, shocking hour, Dannie wakes again, at the brink of midnight, back in 2020. She can’t shake what has happened. It certainly felt much more than merely a dream, but she isn’t the kind of person who believes in visions. That nonsense is only charming coming from free-spirited types, like her lifelong best friend, Bella. Determined to ignore the odd experience, she files it away in the back of her mind.
That is, until four-and-a-half years later, when by chance Dannie meets the very same man from her long-ago vision.
Brimming with joy and heartbreak, In Five Years is an unforgettable love story that reminds us of the power of loyalty, friendship, and the unpredictable nature of destiny.

Rebecca Serle’s newest novel, In Five Years, caught me by surprise. In a couple of different ways.

First off, it’s not the story I believed it to be. I expected a romance — it’s not. Not really. It is, but it isn’t.

Secondly, I had no clue I would love it. I thought I would like it, at best. But love it? Nope. I never saw it coming.

“Where do you see yourself in five years?”

We all have had this asked of us at some point in our lives. With In Five Years, Serle seizes the age-old proverbial question and thematically runs with it.

Dannie Kohan lives strictly by the rules. Her five-year plan is meticulously outlined; every personal and professional goal is listed. To her, words such as “spontaneity” and “flexibility” do not even exist. They belong more in the world of her carefree best friend, Bella – not in Dannie’s.

Life is great. Perfect, even. And just when Dannie thinks life cannot be any better, she has the best day of her life. She nails her interview for her dream job and becomes engaged to her boyfriend, David.

That night, Dannie falls asleep contentedly on the couch, knowing her life is on track, heading in the right direction. But when she awakens, she is no longer in her apartment. She is wearing a different dress and a different ring. And there is a very different man next to her, who is most definitely not David.

Within a matter of minutes, Dannie quickly realizes she has somehow been forwarded five years into the future. But after only one hour, she awakens once again in her own home, beside David, back where she belongs.

Shaken and haunted by her remembrance of that fateful dream, Dannie is determined to forget the entire experience. She focuses instead on her five-year plan and her engagement, pushing aside all lingering memories of her potential future. That is, until the night Dannie crosses paths with the man she met in her dream, and she finds herself being uncontrollably propelled closer and closer to that one inescapable hour.

And that’s it. That’s all I’m going to give you. Because In Five Years works best if you know nothing further of the plot. The narrative takes a very unexpected turn, and if you see it coming, the profound impact of the story will be greatly lessened.

But what I will share with you is this –

The novel is utterly captivating. It is emotional and heartfelt. It is elegantly written by Serle, with prose that is beautifully sparse. Its size is slim, making for swift consumption, possibly in one sitting.

And how you will ultimately feel about the novel will likely mirror your emotional reaction to Dannie. Because none of the secondary characters are fleshed out. Not fully. At least, not enough to genuinely feel much of anything towards them. She is the anchor of the story. The foundation. She is the only one we come to truly know.

The problem is that even though we may know Dannie, it is difficult to like her. She is the Type A-est of Type As. She is selfish. Controlling. She is extremely possessive. To be honest, I didn’t care for her at all in the beginning – and I still don’t know whether I fully like her.

But by the end, I understood her. I felt empathy and compassion for her. And it proved to be enough. Albeit feeble, this appreciation of her character allowed me to be entirely immersed in the novel, my whole heart and all. As well as be emotionally wrecked by it.

All of us know that every reader experiences a novel differently. Not every person connects with every character. That said, I suspect that if you do not form a similar bond as I did with Dannie, or at the very minimum, accept her, then the novel will not be a read you will remember. It may be tedious. It will not be enjoyable.

Consider yourself lucky, however, if you do find some sort of solid footing with Dannie. Or share enough common ground with her to care. For In Five Years will move you. It will break your heart and renew it. It will bring emotion to the surface and leave rawness in its place.

And the experience will be unforgettable.