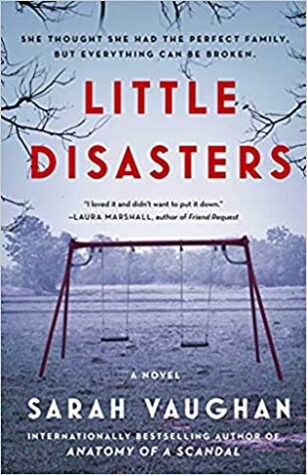 A new thought-provoking novel exploring the complexity of motherhood and all that connects and disconnects us.

You think you know her…but look a little closer.

She is a stay-at-home mother-of-three with boundless reserves of patience, energy, and love. After being friends for a decade, this is how Liz sees Jess.

Then one moment changes everything.

Dark thoughts and carefully guarded secrets surface—and Liz is left questioning everything she thought she knew about her friend, and about herself. The truth can’t come soon enough.

Motherhood is hard. It’s stressful. It’s chaotic. It gives no rest to the weary.

But never would I wish to change a single thing about it.

And when I think back to the “baby years” with my two boys, I smile with love and fondness at the memories. But I also shudder. For I remember —

The never-ending sleepless nights and debilitating fatigue.
The irrational fear and anxiety.
The feelings of isolation and sadness.
The uncontrollable tears.
The overwhelming, crushing sense of responsibility.

For some women like me, motherhood has a lot of bad mixed in with the good. And Sarah Vaughan brings the dichotomous complexities of the experience into sharp focus in her newest novel, Little Disasters.

Liz, a hospital pediatrician, is surprised to find her close friend, Jess, in her ER one evening, asking for her ten-month-old daughter, Betsey, to be examined. Jess claims that Betsey had not been feeling well after taking a minor tumble at home and that her husband had asked her to bring the baby in out of an abundance of caution. To Jess’ horror, Liz quickly diagnoses Betsey with a severe skull fracture.

Questions immediately arise as to the nature of Betsey’s injury. And when pressed by Liz, Jess is oddly vague, evasive, and unable to provide a satisfactory explanation. Liz has no choice but to bring Betsey’s injury to the attention of the authorities – and Liz and Jess are soon caught up in an unimaginable nightmare from which they hope all those involved will survive unscathed.

Settling on a rating for Little Disasters has been a bit of a struggle. Because on the whole, it’s a compelling and compulsively page-turning domestic drama/mystery. (Readers should note it is not a thriller, as it has been mistakenly labeled.) The pace is steady, if not swift. The narrative is never boring, and the novel reads quickly. The characterization may not be fantastic, but it is solid enough that great empathy is felt for Liz, Jess, and the cast of supporting characters.

And to be fair, the novel does provide a fairly realistic depiction of postpartum depression and anxiety. As I alluded earlier, I suffered a mild touch of it, myself, after giving birth to my first son. From personal experience, I can vouch that the postpartum emotions and behavior of the ill women in the novel ring true, along with the narrative examples of the disastrous potential outcomes that can arise if the disorder is severe and left untreated.

But despite all its positive attributes, it is extremely difficult to ever stay fully immersed and connected to Little Disasters. The reason for this is twofold. Firstly, Vaughan’s prose is sometimes clunky and does not always flow smoothly. Secondly, the narrative feels cluttered with an overabundance of repetitive thoughts and unnecessary observations of the characters. Too often, my concentration would break, and I would suddenly be dropped out of the narrative simply because I encountered an awkward patch of writing or a section that I felt I had read before. Another round of editing to pare the novel down would have served it well, I think.

Moreover, Vaughan inadvertently lessens the overall impact of the novel by unwisely making a last-ditch effort to drive the narrative into thriller territory. Instead of wrapping the story up at what is an obvious and natural stopping point, she blows right by it and throws in an unneeded twist that, while startling and surprising, ultimately weakens and cheapens the story.

But at the same time, I feel I should also mention that the last section of the novel – the shocking twist – is significantly and substantially better written. Vaughan’s prose is noticeably more fluid, and the narrative isn’t so crammed with extraneous filler. She writes with a leaner touch, thereby breathing new life and excitement into the conclusion.

It’s a shame that Vaughan’s best writing is only displayed during the last ten percent of Little Disasters. Had she written the entirety of the novel in the same deft manner, I believe I would be awarding it a much higher rating.

Nevertheless, I do still recommend the novel, caveats and all. I cannot deny the fact that I did enjoy it. And I genuinely appreciate Vaughan’s efforts to increase awareness and understanding of postpartum depression.

I received an Advanced Readers Copy from Atria/Emily Bestler Books and NetGalley in exchange for an honest review. All opinions included herein are my own.