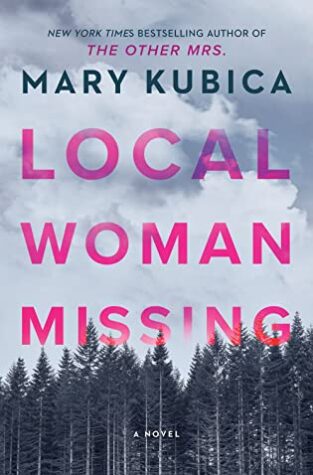 People don’t just disappear without a trace…
Shelby Tebow is the first to go missing. Not long after, Meredith Dickey and her six-year-old daughter, Delilah, vanish just blocks away from where Shelby was last seen, striking fear into their once-peaceful community. Are these incidents connected? After an elusive search that yields more questions than answers, the case eventually goes cold.
Now, eleven years later, Delilah shockingly returns. Everyone wants to know what happened to her, but no one is prepared for what they’ll find…
In this smart and chilling thriller, master of suspense and New York Times bestselling author Mary Kubica takes domestic secrets to a whole new level, showing that some people will stop at nothing to keep the truth buried.

I’m baffled. I don’t know what’s wrong with me.

Because I shouldn’t have liked Mary Kubica’s latest thriller, Local Woman Missing. But I did.

Shelby Tebow vanishes late one night while out for a jog. Meredith Dickey and her six-year-old daughter, Delilah, disappear shortly thereafter, just blocks away from where Shelby was last seen.

Fast forward 11 years, and Delilah shockingly returns, sparking renewed questions as to the true nature of all three disappearances.

If the story sounds like your standard thriller fare, it’s because it is. Local Woman Missing does nothing new.

But what it does do is engage you. It glues you to the page. It grips you in its thrall, so that you’re furiously reading, desperate to know what really occurred when Shelby, Meredith, and Delilah vanished.

And it doesn’t matter that the characters’ actions are frustratingly illogical. Or that the story often veers into eye-rolling ridiculousness. Or that much of what happens in the novel is utterly unbelievable.

Because Local Woman Missing is terrifically entertaining, fast-paced, and compelling. It keeps you guessing, and the guessing is great fun.

Enjoy your book hangover. It’s gonna be a doozy.

My sincerest appreciation to Mary Kubica, Park Row, and Edelweiss+ for the Advance Review Copy. All opinions included herein are my own.