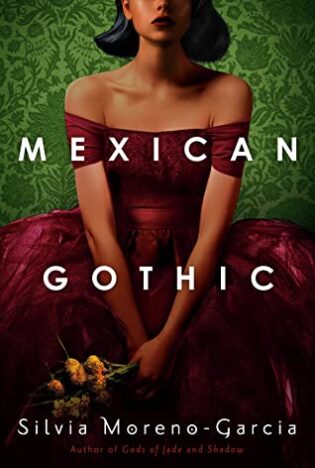 An isolated mansion. A chillingly charismatic aristocrat. And a brave socialite drawn to expose their treacherous secrets. . . .
From the author of Gods of Jade and Shadow comes a novel set in glamorous 1950s Mexico.
After receiving a frantic letter from her newlywed cousin begging for someone to save her from a mysterious doom, Noemí Taboada heads to High Place, a distant house in the Mexican countryside. She’s not sure what she will find - her cousin’s husband, a handsome Englishman, is a stranger, and Noemí knows little about the region.
Noemí is also an unlikely rescuer: She’s a glamorous debutante, and her chic gowns and perfect red lipstick are more suited for cocktail parties than amateur sleuthing. But she’s also tough and smart, with an indomitable will, and she is not afraid: not of her cousin’s new husband, who is both menacing and alluring; not of his father, the ancient patriarch who seems to be fascinated by Noemí; and not even of the house itself, which begins to invade Noemi’s dreams with visions of blood and doom.
Her only ally in this inhospitable abode is the family’s youngest son. Shy and gentle, he seems to want to help Noemí but might also be hiding dark knowledge of his family’s past. For there are many secrets behind the walls of High Place. The family’s once colossal wealth and faded mining empire kept them from prying eyes, but as Noemí digs deeper she unearths stories of violence and madness.
And Noemí, mesmerized by the terrifying yet seductive world of High Place, may soon find it impossible to ever leave this enigmatic house behind.

Set in 1950s Mexico, the novel follows the young socialite, Noemi Taboada, as she travels to High Place, an old mansion in the countryside, to visit her newly married cousin, Catalina. Concerned for her cousin’s welfare after receiving a disturbingly odd letter from Catalina, Noemi is uncertain as to what she will find at the house upon her arrival.

Noemi quickly learns that not only is High Place dreary and decrepit, but it is inhabited by the highly peculiar and unusual Doyle family. Determined to help her cousin, Noemi refuses to be intimidated by the members of Catalina’s married-into family – namely, the enigmatic Virgil, her cousin’s husband, and Howard, the elderly Doyle patriarch who develops a weird obsession with Noemi, herself. And she also fails to be frightened by High Place, even as the house begins to occupy and fill her dreams with disturbing, unimaginable scenes of horrifying violence.

Before long, Noemi discovers that many dark and shocking secrets hide among the Doyles and the confines of High Place. She can only hope that it’s not too late to save Catalina, and herself, from the clutches of the family and the house.

I think Moreno-Garcia took a bit of a risk with Mexican Gothic. Many genres are crossed and bent in order for her to successfully and innovatively twist the classic Gothic haunted house story. In the hands of a lesser writer, I believe the novel would’ve likely fallen flat on its face. But Moreno-Garcia is certainly not a lesser writer. And her gamble pays off handsomely.

The novel is incredibly atmospheric and eerie. Moreno-Garcia’s writing is so vividly descriptive, and she creates an environment on the page that is almost claustrophobic to read. High Place comes to life – I could visualize the colors and the tapestries, smell the decay, feel the dampness of the hallways. I felt as if I was within the walls of the old mansion, right alongside Noemi. Moreno-Garcia also employs more of a classic style of writing that, to me, is very reminiscent of the 1950s and serves to further set the scene, creating a feeling of being swept back in time to a different era.

Moreover, Moreno-Garcia takes her time developing the story and refuses to rush the narrative. The pace, admittedly, is slightly sluggish in the beginning of the novel, but not ever was I bored. I found the slow build of the creep factor, the gradually escalating strangeness of High Place to be quite effective.

But in terms of horror, Mexican Gothic is not what I would consider to be truly frightening. It stimulates a different kind of terror in the reader. It’s more of a chilling, grotesque, sickening, shudder-inducing, Lovecraft and New Weird type of horror, rather than an I-need-to-leave-all-the-lights-on-to-go-to-sleep-because-I’m-so-scared type of horror.

And Noemi – I enjoyed her immensely. She’s smart. She’s brave. She’s witty. She’s also extremely self-absorbed and superficial, but she shows true concern for Catalina and genuinely desires to help her. She has a strong heart. Moreno-Garcia puts forth great effort to develop Noemi fully, resulting in a very well-rounded character.

But the Doyle family – well-rounded, they are not. All we truly know about Virgil, Howard, and the cousins, Florence and Francis, is that they are certifiably creepy and highly odd. Occasionally, we are given details about their past histories to fill in the gaps. For the most part, however, they come across as extremely flat, one-dimensional individuals.

You know what, though? The flat characterization still works, for some reason. I believe it has something to do with the overall classic horror film feel of Mexican Gothic and all the Alfred Hitchcock vibes the story radiates. In my mind while reading, I repeatedly envisioned Hitchcock turning the narrative into a movie. And the flat, almost distant characterization of the Doyle family seems to fit the novel if viewing it from the standpoint of an old-school scary movie. (Make sense? Hope so.)

Now, for my one complaint – the mystery regarding the origin of the supernatural phenomena and illness at High Place is just too simple for the reader to solve. It is glaringly obvious if close attention is paid. Moreno-Garcia neither hides her hand well, nor bluffs the reader. By the time I was a quarter of the way through the book, I knew the how and why of all the madness, and I was mildly disappointed that the secret of the source was not more heavily veiled.

Sigh. Perfection is difficult to come by, isn’t it?

As imperfect as it may be, Mexican Gothic is nonetheless a terrific read. I loved it. And I highly recommend it.