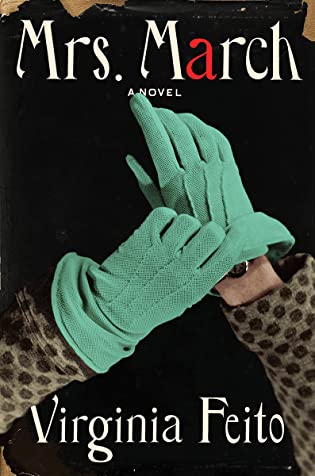 “I read Virginia’s novel in one sitting and was so captured by it I knew I had to make it and play Mrs. March. As a character, she is fascinating, complex, and deeply human and I can’t wait to sink my teeth into her.” ―Elisabeth Moss
Who is Mrs. March?
A twenty-first-century Highsmith, Virginia Feito conjures the unforgettable Mrs. March, an Upper East Side housewife whose life is shattered by her husband’s latest novel.
In this astonishing debut, the venerable but gossipy New York literary scene is twisted into a claustrophobic fun house of paranoia, horror, and wickedly dark humor. George March’s latest novel is a smash. No one is prouder than Mrs. March, his doting wife. But one morning, the shopkeeper of her favorite patisserie suggests that his protagonist is based on Mrs. March herself: “But . . . ―isn't she . . .’ Mrs. March leaned in and in almost a whisper said, ‘a whore?” Clutching her ostrich-leather pocketbook, she flees, that one casual remark destroying her belief that she knew everything about her husband―as well as herself. Suddenly, Mrs. March is hurled into a harrowing journey that builds to near psychosis, one that begins merely within the pages of a book but may uncover both a killer and the long-buried secrets of her past.

It’s a shame Alfred Hitchcock is no longer with us. He would turn Virginia Feito’s chilling debut psychological thriller, Mrs. March, into a creeptastic movie.

The good news is, in Hitchcock’s absence, Elisabeth Moss and her production company have snagged the film rights, with Moss planning to portray the titular character. But while I have no doubt she and her team will do a fine job bringing the story to life on the screen, I still wish the famed classic film director would be the one behind the camera.

Because Mrs. March has HITCHCOCK written all over it. Forward, backward, upward, and downward. Diagonally, too.

Feito’s novel is a disturbing character study of a woman spiraling into madness. After a shopkeeper innocently likens Mrs. March to the protagonist in her husband’s newest novel, Mrs. March begins to unravel. She’s anxious, paranoid, suspicious. And she declines rapidly, ultimately becoming trapped in a blurred reality, unable to separate fact from the fiction of her mind.

To observe Mrs. March’s deterioration is eerie. Unnerving. Horrifying. But I must say, it makes for some fascinating reading.

And the manner in which Feito tells the tale only adds to the intrigue. She writes with an air of mystery and dark humor, somehow distorting the story, giving it a surreal and fever-dream feel. It never reads clear. I’m still uncertain as to what is real versus imagined in the novel, and even small details like the time period, Mrs. March’s age, and her appearance are fuzzy. The ambiguity of it all is absolutely captivating.

Inexplicably, however, Mrs. March loses a bit of steam in the final act. I find it difficult to identify the reason why since by this point, Mrs. March is the messiest of hot messes. But within myself, I noticed a slight disengagement from the story, and the best I can figure is that the last 50 pages aren’t as fully developed and deeply immersed in her broken mind. I sensed a separation from the character.

Even so, unequivocally, Virginia Feito has written an impressive debut. Mrs. March is addictive, haunting, and twistedly entertaining.

Hitchcock is smiling, I think.