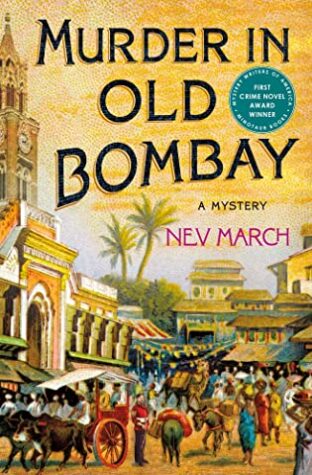 In 19th century Bombay, Captain Jim Agnihotri channels his idol, Sherlock Holmes, in Nev March’s Minotaur Books/Mystery Writers of America First Crime Novel Award-winning debut.
In 1892, Bombay is the center of British India. Nearby, Captain Jim Agnihotri lies in Poona military hospital recovering from a skirmish on the wild northern frontier, with little to do but re-read the tales of his idol, Sherlock Holmes, and browse the daily papers. The case that catches Captain Jim's attention is being called the crime of the century: Two women fell from the busy university’s clock tower in broad daylight. Moved by Adi, the widower of one of the victims — his certainty that his wife and sister did not commit suicide — Captain Jim approaches the Parsee family and is hired to investigate what happened that terrible afternoon.
But in a land of divided loyalties, asking questions is dangerous. Captain Jim's investigation disturbs the shadows that seem to follow the Framji family and triggers an ominous chain of events. And when lively Lady Diana Framji joins the hunt for her sisters’ attackers, Captain Jim’s heart isn’t safe, either.
Based on a true story, and set against the vibrant backdrop of colonial India, Nev March's Minotaur Books/Mystery Writers of America First Crime Novel Award-winning lyrical debut, Murder in Old Bombay, brings this tumultuous historical age to life.

Okay. Get ready for yet another average, middle-of-the-road review.

Because I liked Murder in Old Bombay, but I didn’t love it.

Set in British India in 1892 and based on a true story, Nev March’s Murder in Old Bombay is a historical whodunit, heavily inspired by The Sherlock Holmes Mysteries.

Captain Jim Agnihotri, recovering in Poona military hospital in Bombay after being injured in battle, spends his days surveying the newspapers and rereading the stories of his sleuthing hero, Sherlock Holmes. One local case, in particular, draws Captain Jim’s attention — the death of two young women, their bodies plunging to the ground from the top of the university’s clock tower in broad daylight, supposedly in a dual act of suicide.

Inspired by a letter written by Adi Framji, the surviving husband of one of the victims, in which Adi fervently insists that his wife and sister’s deaths were not self-inflicted, Captain Jim approaches the family upon his release from the hospital. He is immediately retained by the Framjis and asked to investigate the deaths of the two women.

Captain Jim hopes to bring closure and peace to Adi and the rest of the Framji family by uncovering the truth behind what transpired that day at the clock tower. But his investigation soon brings more chaos than closure, as the Captain unwittingly sets off a series of events that will forever alter the course of his life – and his heart.

I think I’m about to sound like a broken record. Because once again, the reason for my tepid praise of Murder in Old Bombay is that I believe March tries to do too much with the story. It’s a common problem; one that I’ve repeatedly mentioned in a handful of my reviews this year. And I have found that when an author bites off more than he or she can chew, the end result is always the same – the novel is cluttered, unfocused, and stretched too thin.

If March would have held tight to the historical mystery path, I think the novel would have been terrific. But instead, she broadens the story too widely. One minute the novel feels like a cozy, the next a romance, and after that, an adventure story and a military war drama. There are also far too many ancillary storylines and characters of which to keep track, and the mystery at the novel’s core, the deaths of the two Framji women, is often lost in the shuffle of it all.

And since the story is chocked so full of, well, everything, none of the everything is developed sufficiently because March has not given herself space in the narrative to do so. The novel greatly lacks substance and weight.

The major plot points are unrealized and too quick.
The characters are one-dimensional and not fully fleshed.
The motivations for character behavior are sometimes nonsensical.

On top of all that, the detective work is just too unbelievably easy for Captain Jim. The dots all connect, exactly when he needs them to connect. Somehow, his amateur deductive reasoning skills are always spot on, without him ever having any prior investigative experience. (I also found many of his assumptions and much of his reasoning to be flimsy and faulty stretches of logic. He takes some great leaps in his thinking, let me tell you.) He locates whomever and whatever he needs to locate at the precise, necessary moment.

But you know what? I still found Murder in Old Bombay to be a pleasant and mildly compelling read. The historical backdrop of 19th century Bombay is certainly interesting, and Captain Jim and the Framjis are appealing characters. I cared about their welfare and hoped for their happiness.

Did you catch that? March made me care.

I was engaged and invested in the story. I anxiously awaited the unveiling of the solution to the mystery surrounding the deaths of the of two women. I felt hope for the love story and Captain Jim’s fragile heart.

And March got me with the ending. She moved me. Tugged on my soul. The novel’s final scene warmed my cold, cold heart and brought a tear to my eye. I may have even felt a goosebump or two. (Or maybe three. But no more than three.)

So, I must give credit where credit is due. Regardless of however lightweight and middle-of-the-road the novel may be, Murder in Old Bombay is nevertheless enjoyable. By no means is the novel a poor recipient of your precious reading time.

But to read or not to read? Always, that is the ever important question.

This time, I will give you a nudge slightly in the direction of read.

My sincerest appreciation to Minotaur Books and NetGalley for the Advance Review Copy. All opinions included herein are my own.