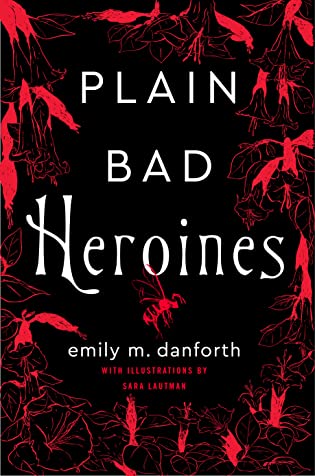 “Brimming from start to finish with sly humor and gothic mischief. Brilliant.” —SARAH WATERS
The award-winning author of The Miseducation of Cameron Post makes her adult debut with this highly imaginative and original horror-comedy centered around a cursed New England boarding school for girls—a wickedly whimsical celebration of the art of storytelling, sapphic love, and the rebellious female spirit.

Our story begins in 1902, at The Brookhants School for Girls. Flo and Clara, two impressionable students, are obsessed with each other and with a daring young writer named Mary MacLane, the author of a scandalous bestselling memoir. To show their devotion to Mary, the girls establish their own private club and call it The Plain Bad Heroine Society. They meet in secret in a nearby apple orchard, the setting of their wildest happiness and, ultimately, of their macabre deaths. This is where their bodies are later discovered with a copy of Mary’s book splayed beside them, the victims of a swarm of stinging, angry yellow jackets. Less than five years later, The Brookhants School for Girls closes its doors forever—but not before three more people mysteriously die on the property, each in a most troubling way.
Over a century later, the now abandoned and crumbling Brookhants is back in the news when wunderkind writer, Merritt Emmons, publishes a breakout book celebrating the queer, feminist history surrounding the “haunted and cursed” Gilded-Age institution. Her bestselling book inspires a controversial horror film adaptation starring celebrity actor and lesbian it girl Harper Harper playing the ill-fated heroine Flo, opposite B-list actress and former child star Audrey Wells as Clara. But as Brookhants opens its gates once again, and our three modern heroines arrive on set to begin filming, past and present become grimly entangled—or perhaps just grimly exploited—and soon it’s impossible to tell where the curse leaves off and Hollywood begins.
A story within a story within a story and featuring black-and-white period illustrations, Plain Bad Heroines is a devilishly haunting, modern masterwork of metafiction that manages to combine the ghostly sensibility of Sarah Waters with the dark imagination of Marisha Pessl and the sharp humor and incisive social commentary of Curtis Sittenfeld into one laugh-out-loud funny, spellbinding, and wonderfully luxuriant read.

This is a tricky review to write.

Emily Danforth’s Plain Bad Heroines has been one of my most anticipated Fall reads. And it would be a severe understatement to say I was merely thrilled to receive the ARC. “Joyfully ecstatic” may be a more accurate descriptor. I may have even done a little happy dance upon its receipt. (Don’t judge.)

But now that I’ve finished reading it, I’m a bit uncertain as to how I truly feel about the book. My thoughts are all sort of jumbled, contradictory, and complicated.

I absolutely loved certain aspects of the novel, exactly as I expected. But much to my surprise, I found other facets to be slightly disappointing.

Let’s see if I can break it all down for you.

The novel first takes us back to 1902, introducing us to The Brookhants School for Girls, where the current obsession of the students is a memoir by the scandalous young writer, Mary MacLane. The intense MacLane fanaticism causes the girls to establish their own club, The Plain Bad Heroine Society. But when three girls are subsequently found dead on the School’s grounds, all with a copy of the memoir in their possession, Brookhants’ Headmistress, Libbie, and her partner, Alex, begin to wonder whether the school is cursed – and whether the MacLane memoir could be the source of the school’s troubles.

More than one hundred years later, Brookhants is left vacant and decaying. But it is back in the public eye, thanks to the hit novel of Merritt Emmons. The novel, telling the tale of the haunted and cursed school, is so successful that it is quickly adapted into a provocative horror film starring “It Girl,” Harper Harper (Not a typo. Her name really is Harper Harper. There’s a story behind it.), and former child star, Audrey Wells.

But as Brookhants welcomes both a movie set and a new group of Plain Bad Heroines through its gates, the line between curse and Hollywood rapidly blurs. And the three young heroines soon find themselves struggling to separate reality from horror-movie magic.

Unequivocally, Plain Bad Heroines is an ambitious novel. And to Danforth’s credit, she has created an engrossing, highly inventive, and multilayered story. History, feminism, gothic horror, sapphic love, and playful humor are all masterfully entangled by her amazing storytelling.

The novel, however, takes patience. Being 600 pages in length, it’s loooong. And the problem is, you feel it’s length. It’s noticeable. And while some parts of the story fly by, with the pages turning quickly – there are sizable chunks of the novel where the narrative plods along way too slowly. Particularly, in the middle. There are unnecessary scenes that could have been cut, and necessary scenes that could have been shortened. I appreciate the fact that Danforth never rushes the story, but I do think it would have served the novel well to have been slimmed down a bit.

Danforth’s writing style is also a bit quirky and wordy. She tells the story through the voice of an anonymous omniscient narrator, which, while cleverly entertaining at times, often comes across as forced and a little clunky. But beauty is prevalent in her words, too, and Danforth knows how to write an eloquent turn of phrase.

And I feel I should note that as with so many of the horror novels I’ve read this year, Plain Bad Heroines isn’t very scary. It’s atmospheric and creepy, and there are a few scenes of stomach-churning disgust. But scary? Not so much.

Now, on to the dual storylines.

Of the two, I found the 1902 narrative surrounding Libbie and Alex to be far more compelling. It’s dark and spooky. It’s gothic and mysterious. The pace is quicker. It’s just more riveting, all the way around. And it culminates in a thrilling and satisfying conclusion.

The modern-day narrative, however, is from where my disappointment in the novel stems. Harper, Audrey, and Merritt are all interesting characters, but their storyline is soooo sluggish for the first half of the novel. The tempo of their story does dramatically pick up once filming of the movie commences, though, and from that point forward, an underlying current of foreboding slowly begins to build.

The novel sputters and fizzles out.

Oh, something bad happens in relation to the three young women. But it’s not bad enough. It’s not very startling or shocking. Or heartbreaking. It’s a complete and utter letdown.

Plus, the ending to the trio’s story fails to ever wrap back around to the 1902 storyline. Like, at all. There is no overlap, no final intersection or connection of the two narratives. Nothing ever comes full circle, and we are left with quite a few unanswered questions about what transpired during the filming of the movie.

And sadly, I now wonder what even was the point of the storyline involving Harper, Audrey, and Merritt. Because I clearly am missing it. The entire book has been swirling around in my head for the last day, and I am still unable to discern the reason for their story. I don’t understand why it needed to be told, when it ends the way that it ends.

In hindsight, I believe the book, as a whole, would have worked better had the modern-day storyline simply been eliminated. Or perhaps the two narratives would have both been more successful had they been written as a duology of separate novels.

I know that my criticism of Plain Bad Heroines may make it seem as if I failed to enjoy it. But that’s not the case. I did enjoy it, and I do not regret one hour of the many, many hours I spent reading it.

Do I recommend it? Yes. My recommendation is just not an effusive one.

My sincerest appreciation to William Morrow and NetGalley for the Advance Review Copy. All opinions included herein are my own.