Rhythm of War (The Stormlight Archive, #4) 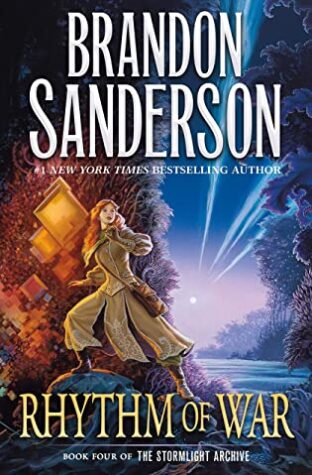 The eagerly awaited sequel to the #1 New York Times bestselling Oathbringer, from epic fantasy author Brandon Sanderson
After forming a coalition of human resistance against the enemy invasion, Dalinar Kholin and his Knights Radiant have spent a year fighting a protracted, brutal war. Neither side has gained an advantage, and the threat of a betrayal by Dalinar's crafty ally Taravangian looms over every strategic move.
Now, as new technological discoveries by Navani Kholin's scholars begin to change the face of the war, the enemy prepares a bold and dangerous operation. The arms race that follows will challenge the very core of the Radiant ideals, and potentially reveal the secrets of the ancient tower that was once the heart of their strength.
At the same time that Kaladin Stormblessed must come to grips with his changing role within the Knights Radiant, his Windrunners face their own problem: As more and more deadly enemy Fused awaken to wage war, no more honorspren are willing to bond with humans to increase the number of Radiants. Adolin and Shallan must lead the coalition’s envoy to the honorspren stronghold of Lasting Integrity and either convince the spren to join the cause against the evil god Odium, or personally face the storm of failure.

“Journey before destination, you bastard.”

Whew. I did it. I finished the chunkster.

Rhythm of War, the fourth book in Brandon Sanderson’s high fantasy series, The Stormlight Archive, is massive. Clocking in at 1200+ pages, the novel is, as I said, a chunkster, and it is not a quick and easy read.

In fact, none of the books in the series are quick and easy – the first four volumes are all upwards of 1000 pages. And seeing as Sanderson has planned for 10 books total, with each being published two or three years apart … well …

The Stormlight Archive is a commitment. Plain and simple.

But it’s worth it. It’s the most phenomenal story I have ever read, and believe you me, I have read a ton of stories in my 44 years. The series is destined to be a fantasy classic.

I love it. I adore it. Every fiber of my being loves and adores it.

Having said that, Rhythm of War is my least favorite book in the series. (So far.) Now, don’t get me wrong – all my fibers still loved and adored it. But it just doesn’t have quite the same oomph as the preceding novels. And here’s why:

1. It’s a bridge book. We are nearing the end of the first arc of the series, with the upcoming Book #5 being the final volume of the front half. Rhythm of War is more plodding than its predecessors presumably because Sanderson is laying the groundwork for the grand finale of the first act.

2. The story is science-heavy. Fabrials, light, and sound are a huge focus of the story, and Sanderson explains in detail how they all work, individually and together. Over and over. And over. It bogs the novel down.

3. Shallan and Adolin. Parts of Shallan and Adolin’s storyline are way too drawn out. And when things start to finally get interesting, the duo disappears from the narrative. Literally, hundreds of pages go by before we pick back up with them, so their story feels uneven and disjointed.

4. The not-as-epic ending. Sanderson knows how to write a killer ending, and Rhythm of War’s conclusion is no exception. It’s thrilling, surprising, emotional, and cinematic. But it’s less epic than the previous three endings.

Rhythm of War is amazing, as is Brandon Sanderson. His creativity and vision are unmatched. I enjoyed every minute of my trip to Roshar, and I am so sad to have returned home.