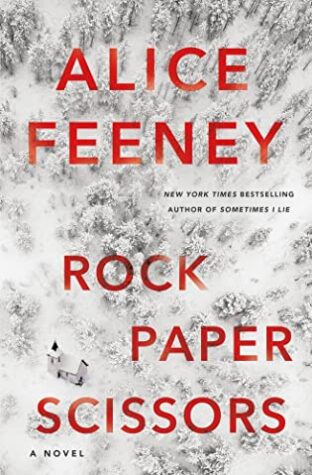 Think you know the person you married? Think again…
Things have been wrong with Mr and Mrs Wright for a long time. When Adam and Amelia win a weekend away to Scotland, it might be just what their marriage needs. Self-confessed workaholic and screenwriter Adam Wright has lived with face blindness his whole life. He can’t recognize friends or family, or even his own wife. Every anniversary the couple exchange traditional gifts – paper, cotton, pottery, tin – and each year Adam’s wife writes him a letter that she never lets him read. Until now. They both know this weekend will make or break their marriage, but they didn’t randomly win this trip. One of them is lying, and someone doesn’t want them to live happily ever after.
Ten years of marriage. Ten years of secrets. And an anniversary they will never forget.
Rock Paper Scissors is the latest exciting domestic thriller from the queen of the killer twist, New York Times bestselling author Alice Feeney.

Not once, but twice, Alice Feeney has outsmarted me. The first time being earlier this year when I read her twisty novel, His & Hers. Now she’s gone and done it for the second time with Rock Paper Scissors, her latest husband-and-wife thriller tale set in an eerie, snow-buried Scottish chapel.

There was a time, not very long ago, when I thought myself clever. Oh, how I miss those cocksure days.

In all seriousness, I love being outsmarted by Feeney. It’s great fun. Trickery is her game, and I have such admiration for her deviously creative mind.

I was convinced I had Rock Paper Scissors figured out, just as I believed I did His & Hers. Halfway through, I’d concocted this crazy, far-fetched theory for the end reveal, and I was so wrong. Embarrassingly wrong, I should say, especially since I’d opened my big mouth and boasted of my brilliance to my Goodreads buddy-reading pal, Catherine Woodward.

Crow is delicious. Eating it is an enlightening experience.

And the humiliation of it is a small price to pay for the thriller excellence that is Rock Paper Scissors. It’s addictive. Suspenseful. A real page-turner.

I look forward to your next challenge, Ms. Feeney. Game on.

This was a fun buddy read with my dear friend, Catherine Woodward. You should check out her rave review on Goodreads, too.