She Who Became the Sun (The Radiant Emperor, #1) 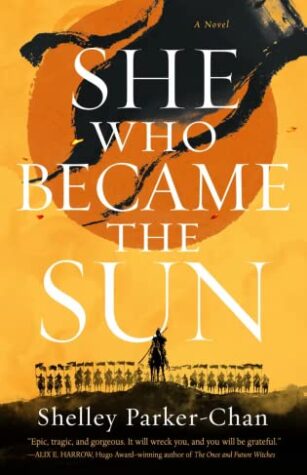 She Who Became the Sun (The Radiant Emperor, #1) by Shelley Parker-Chan
Published by Tor Books on July 20, 2021
Pages: 416
View Title on Goodreads
Bantering Books Rating:

In a famine-stricken village on a dusty yellow plain, two children are given two fates. A boy, greatness. A girl, nothingness…
In 1345, China lies under harsh Mongol rule. For the starving peasants of the Central Plains, greatness is something found only in stories. When the Zhu family’s eighth-born son, Zhu Chongba, is given a fate of greatness, everyone is mystified as to how it will come to pass. The fate of nothingness received by the family’s clever and capable second daughter, on the other hand, is only as expected.
When a bandit attack orphans the two children, though, it is Zhu Chongba who succumbs to despair and dies. Desperate to escape her own fated death, the girl uses her brother's identity to enter a monastery as a young male novice. There, propelled by her burning desire to survive, Zhu learns she is capable of doing whatever it takes, no matter how callous, to stay hidden from her fate.
After her sanctuary is destroyed for supporting the rebellion against Mongol rule, Zhu uses the chance to claim another future altogether: her brother's abandoned greatness.
Mulan meets The Song of Achilles; an accomplished, poetic debut of war and destiny, sweeping across an epic alternate China.

It was a rocky start. And a rocky middle. But Shelley Parker-Chan’s historical epic fantasy novel, She Who Became the Sun, won me over in the end.

At least enough to where I want to read the sequel.

Set in an alternate China, She Who Became the Sun is a fantastical, genderqueer retelling of the founding of the Ming dynasty. The story follows the female monk, Zhu Chongba, from childhood to early adulthood, as she assumes her dead brother’s identity and fights to claim his destiny as her own.

It’s a big story with big characters and a lot of big things happening in it.

And I struggled with it. I struggled to connect with Zhu, to stay engaged in the story, and to NOT pick up a different book instead.

Because She Who Became the Sun is just too big for its 400 pages. Being relatively slim in size for an epic fantasy novel, its shortish length cramps the development of the story and Zhu’s characterization.

For starters, way too much of the plot occurs off page. We are blind to almost all climactic events, whether they occur during Zhu’s monastic life or during the war, and we hardly ever see any action. Momentous incidents at the monastery and battles between the Red Turbans and Mongols are skimmed over, with Parker-Chan never taking the time to tell the story of any of it. It’s as if important pieces of the puzzle are missing.

And then there’s the problem of Zhu.

No matter how hard I tried, I couldn’t get inside her head. Very little of the narrative is devoted to her childhood and formative monastic years, and her skimpy backstory keeps the reader at arm’s length. And thanks to the stunted plot, Zhu comes across as flatly one-dimensional and less realized than the secondary characters. It’s extremely difficult to ever truly know her.

Typically, I’m not one to think, “The longer the book, the better.” But in this case, I do believe She Who Became the Sun would’ve been better had it been longer. There’s just too much good story here and too few pages. It’s an opportunity sadly wasted.

But I’m hanging in. Through it all, Parker-Chan managed to sufficiently hook me to where I can’t let Zhu go quite yet. I must see how her story ends.

Fingers crossed the second half is a tad bit bigger.

My sincerest appreciation to Shelley Parker-Chan and Tor Books for the physical Advance Review Copy. All opinions included herein are my own.