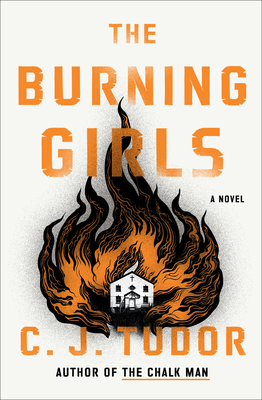 An unconventional vicar moves to a remote corner of the English countryside, only to discover a community haunted by death and disappearances both past and present--and intent on keeping its dark secrets--in this explosive, unsettling thriller from acclaimed author C. J. Tudor.
Welcome to Chapel Croft. Five hundred years ago, eight protestant martyrs were burned at the stake here. Thirty years ago, two teenage girls disappeared without a trace. And two months ago, the vicar of the local parish killed himself.
Reverend Jack Brooks, a single parent with a fourteen-year-old daughter and a heavy conscience, arrives in the village hoping to make a fresh start and find some peace. Instead, Jack finds a town mired in secrecy and a strange welcome package: an old exorcism kit and a note quoting scripture. "But there is nothing covered up that will not be revealed and hidden that will not be known."
The more Jack and daughter Flo get acquainted with the town and its strange denizens, the deeper they are drawn into their rifts, mysteries, and suspicions. And when Flo is troubled by strange sightings in the old chapel, it becomes apparent that there are ghosts here that refuse to be laid to rest.
But uncovering the truth can be deadly in a village where everyone has something to protect, everyone has links with the village's bloody past, and no one trusts an outsider.

I wrote my very first book review a year ago. And over the past 12 months, I have failed to find, from start to finish, a truly satisfying thriller. One that is tightly and expertly written, amazingly entertaining, and not overly ludicrous.

You see, that’s the problem I have with the genre. While the majority of thrillers are, in fact, thrilling, I find so many of them to be absurd, plot-holed, and nonsensical.

But such is not the case with C.J. Tudor’s latest release, The Burning Girls. It checks all my boxes – and it’s absolutely fantastic.

The town of Chapel Croft has a tragic past. Centuries ago, Protestant martyrs were betrayed and burned. Thirty years ago, two teenage girls vanished, never to be found. And within the last few weeks, the local vicar hanged himself inside of the church.

Reverend Jacqueline “Jack” Brooks and her 14-year-old daughter, Flo, arrive in Chapel Croft, intent on starting over. But instead of being warmly received by the townspeople, they are greeted with apprehension, hostility, and an exorcism kit.

Yep. That’s right. An exorcism kit. How’s that for a welcome gift?

As Jack and Flo settle into Chapel Croft, it soon becomes clear the history of the town isn’t just riddled with death and disappearances. It has its fair share of ghosts, too.

When Flo begins seeing burning girls, terrifying visions of young women set aflame, Jack realizes that Chapel Croft’s horrid past no longer wants to be buried – and that it has risen from its grave.

Clearly, The Burning Girls is not your standard thriller. It’s more of a supernatural horror thriller, written very much in the same vein as an old-school Stephen King novel. While reading, it’s almost impossible to not see the similarities to King in both style and tone, and Tudor even gleefully meets the comparison head on by pointedly referencing the beloved author in the narrative.

And Tudor’s novel parallels King in a few other ways.

First off, it’s incredibly entertaining and compulsively readable. I didn’t ever want to put the book down, I was so riveted. And there is never ever a boring, dull moment, with Tudor’s straightforward writing making for a swift and easy read.

Secondly, it’s creepy as all get out and blatantly bloody and gory. The eerie and graphic nature of The Burning Girls makes it not an ideal read for the squeamish and those who dislike being scared. I’m not one to spook easily, but I definitely felt a chill slide down my spine a time or two. Tudor got me, and she got me good.

Thirdly, the novel stars an unforgettable and somewhat quirky lead character. Jack is just . . . so freakin’ cool. She’s a cigarette-smoking, bird-flipping priest who listens to The Killers and has to regularly remind herself to be Christian. She mothers fiercely, and she will unapologetically do whatever is necessary to protect Flo.

I wish I could drink a beer with Jack. We would get along quite well, I think.

And thriller fans – you can relax. Even with its notable King influence, The Burning Girls is still a thriller at heart, and it is filled with non-stop excitement and jaw-dropping twists. It is nowhere near lacking in the thrills department – it simply has chills to go along it.

Which brings me to the one downside of the novel. Tudor too loudly telegraphs her clues to the mysteries. She lays them out in the wide open for all to easily see, requiring only semi-close attention to be paid to find them. Therefore, I successfully solved the big twist and most of the novel’s side puzzles on my own, way earlier than I would have liked.

But it didn’t matter. Suspecting that I had the solution never detracted from my overall enjoyment, and I ultimately found the conclusion satisfying. There were still plenty of surprises for me along the way, and I even think I may have read the novel faster out of urgency to know whether my theories were correct.

And I will say this – those who are lucky enough to not see the big twist coming are in for a shock. The ending of The Burning Girls will knock your socks off.

Bravo, Ms. Tudor. All the stars for you – and my first ever five-star thriller review.

My sincerest appreciation to C.J. Tudor, Ballantine Books, and NetGalley for the Advance Review Copy. All opinions included herein are my own.