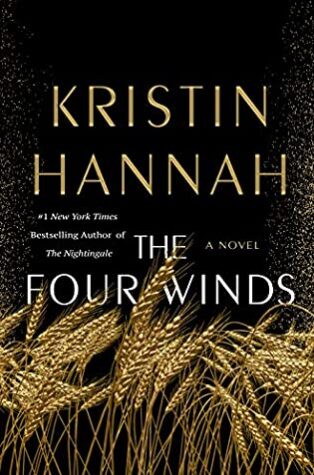 From the #1 New York Times bestselling author of The Nightingale and The Great Alone comes an epic novel of love and heroism and hope, set against the backdrop of one of America’s most defining eras—the Great Depression.
Texas, 1934. Millions are out of work and a drought has broken the Great Plains. Farmers are fighting to keep their land and their livelihoods as the crops are failing, the water is drying up, and dust threatens to bury them all. One of the darkest periods of the Great Depression, the Dust Bowl era, has arrived with a vengeance.
In this uncertain and dangerous time, Elsa Martinelli—like so many of her neighbors—must make an agonizing choice: fight for the land she loves or go west, to California, in search of a better life. The Four Winds is an indelible portrait of America and the American Dream, as seen through the eyes of one indomitable woman whose courage and sacrifice will come to define a generation.

This is a “meet you in the middle” kind of review. An “I liked it, but I didn’t love it” review.

And unfortunately, it’s a “Hannah had me for the first 75% and then blew it with the ending” review.

In The Four Winds, Kristin Hannah’s latest novel of historical fiction, we travel back to the harrowing years of the Great Depression – one of the most challenging eras in America’s history.

It is 1934, and Texas and the Great Plains have been crippled by the Dust Bowl. Farmers are facing economic ruin due to years of endless drought. Crops refuse to grow as the ground shrivels and cracks. And violent and terrifying dust storms are striking the Plains, burying the land in dust.

Elsa Martinelli has a torturous decision to make. Should she and her family remain in Texas to fight for the home and land they love? Or should they head west to California in the hope of starting anew?

Confronted with the most difficult choice of her life, Elsa must somehow find within herself the courage and will to survive.

Undoubtedly, Kristin Hannah is a gifted writer. And she is a writer who has very much come into her own over the last five or six years, now that she’s found her niche writing historical fiction.

There are a few things that Hannah is really good at:

1. Creating likable, brave, and resilient female characters
2. Running her female characters through the wringer, multiple times over
3. Depicting the joys and sorrows of motherhood
4. Evoking readers’ emotions and inducing tears

And The Four Winds displays her skill set to maximum effect. The novel is engrossing, poignant, and unapologetically heart-wrenching. Hannah’s writing is more elegant than it has ever been, and her descriptions of the Great Plains and the dust storms are absolutely spectacular. And she has given her all to Elsa, allowing her to become the heart and soul of the novel.

Elsa’s life during the Dust Bowl is filled with nothing but hardship and strife. She faces trial after trial, tribulation after tribulation, and she perseveres, time and again, pushing aside all fear and pain. For she has no choice but to survive – she has two children, Loreda and Ant – and their lives are dependent upon her. Elsa displays remarkable courage over the course of the novel, and it’s nearly impossible to not care for her welfare.

But The Four Winds is about more than just survival. It’s a beautiful and realistic tribute to motherhood – the good, the bad, and the ugly of it. Through Elsa, Hannah vividly captures not only the unconditional love of mothers and their fierce instinct to protect their children, but also the insurmountable joy, pride, worry, and pain that motherhood encompasses.

And the story is heartbreaking. More than once, tears burned my eyes for Elsa. She is put through so much more than any one person should ever have to bear, and it is extremely hard to be an observer of it.

This then brings me to my first criticism – it’s too much. All the obstacles, the suffering, the storms . . . it wears on the reader and begins to feel unrealistic. It’s as if Hannah takes every single fact and event she uncovered in her research and throws it all at Elsa. And while I have no doubt that what Elsa experiences in The Four Winds did actually happen to those who lived during the Dust Bowl, it’s unbelievable that all of it could happen to one person.

But still, my incredulity did not interfere with my enjoyment of the story. At least not until the ending.

Which is nothing short of a disappointment.

Why? Because it’s pure melodrama. It’s schmaltzy, over-the-top, and emotionally manipulative. My eyes rolled more than they cried, and the unnecessary sappiness made me a bit ill.

In one fell swoop, Hannah lost me. And I knocked a full star off my review.

So, here you go – here is my “meet you in the middle” review of The Four Winds.

My sincerest appreciation to Kristin Hannah, St. Martin’s Press, and NetGalley for the Advance Review Copy. All opinions included herein are my own.