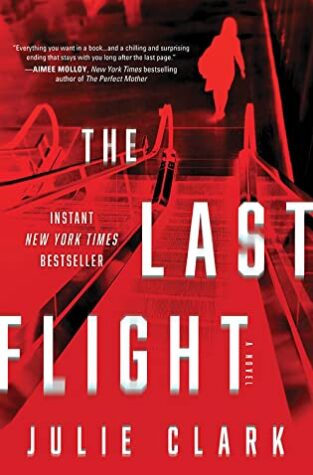 THE INSTANT NEW YORK TIMES BESTSELLER! THE INSTANT USA TODAY BESTSELLER!
Two women. Two Flights. One last chance to disappear.
Claire Cook has a perfect life. Married to the scion of a political dynasty, with a Manhattan townhouse and a staff of ten, her surroundings are elegant, her days flawlessly choreographed, and her future auspicious. But behind closed doors, nothing is quite as it seems. That perfect husband has a temper that burns as bright as his promising political career, and he's not above using his staff to track Claire's every move, making sure she's living up to his impossible standards. But what he doesn't know is that Claire has worked for months on a plan to vanish.
A chance meeting in an airport bar brings her together with a woman whose circumstances seem equally dire. Together they make a last-minute decision to switch tickets ― Claire taking Eva's flight to Oakland, and Eva traveling to Puerto Rico as Claire. They believe the swap will give each of them the head start they need to begin again somewhere far away. But when the flight to Puerto Rico goes down, Claire realizes it's no longer a head start but a new life. Cut off, out of options, with the news of her death about to explode in the media, Claire will assume Eva's identity, and along with it, the secrets Eva fought so hard to keep hidden.
The Last Flight is the story of two women―both alone, both scared―and one agonizing decision that will change the trajectory of both of their lives.

How far would YOU go to escape a bad situation? What would you be willing to sacrifice to save your own life? When all is lost, how great of a chance would you take to protect yourself?

Hmm. Tough questions, I know. I’m glad I don’t have to answer them.

But Julie Clark does. And she addresses these moral dilemmas resoundingly in her (mostly) thrilling new novel, The Last Flight.

Claire Cook is meticulously planning her escape. Married to a powerfully ambitious, physically and emotionally abusive man, she has been plotting for months to flee the suffocating, dangerous nightmare of her life. Then unexpectedly, Claire’s careful plan is derailed by her husband, and she finds herself cornered, her back against a wall.

Until a chance encounter at an airport introduces Claire to Eva James, who is just as desperate as Claire to escape her own dark personal situation. A spur of the moment decision results in the two women trading airplane tickets, and they part ways, each taking the other’s name and flight, hoping to begin new chapters in their lives.

After reading a few not so great thrillers this year, my overall interest in and excitement for the genre have recently waned. Many are just poorly written. They are often riddled with plot holes and illogical decisions, requiring the reader to suspend all belief for the story to even work.

The Last Flight, however, is refreshingly different. More of a literary and character-driven thriller, it is clever, beautifully written, tightly plotted, and (mostly) engrossing. The narrative intelligently twists and turns in various directions, and the second half of the novel is almost unputdownable.

But did you catch my almost? And my two (mostly)s?

The novel suffers from a bit of a pacing and tension problem. The opening is intriguing, and the lead up to Claire and Eva’s identity switch is taut and suspenseful. But then, the main story comes to a grinding halt – for a very, very long time. All sense of urgency, all tension is lost. The plot stalls, and the reader is left treading water, waiting patiently for the narrative to quicken its pace once again.

The overarching story is told through the points of view of both Claire and Eva, with Claire’s narrative occurring in the present day and Eva’s narrative occurring in the past. The trouble is that Clark fails to write an evenly paced, exciting enough present-day story for Claire to adequately balance the lengthy, detailed, not as interesting backstory of Eva. For too long, the narrative is bogged down with Eva’s history, while Claire’s story is paused, desperately in need of forward movement.

Then finally, somewhere around the 2/3 mark, the play button is pressed, and it’s full speed ahead to the (mostly) riveting conclusion. (I feel I should note that after the initial piece of the novel’s puzzle fell into place, I easily predicted the remaining outcome and interconnections of the story. Had my amateur sleuthing been unsuccessful, I do believe I would not have inserted the third (mostly) into this review.)

Clark’s characterization of her leading ladies, though, is phenomenal. Claire and Eva live and breathe on the page. They are strong, savvy, and flawed. They have scars – and wounds yet to be healed. They are both in dire situations that have spiraled out of their control, and you feel empathy for their plights. (Although, it is mildly off-putting that Eva refuses to accept any responsibility for her actions and often blames others for the circumstances in which she finds herself. Just sayin’.)

With Claire and Eva, Clark has written two extremely brave women, who, in the end, do exactly what they at first believe to be impossible. They use their brains, their skills, and their resources to create their own way out of horrible situations, setting all fear aside to do what is necessary to save themselves.

The Last Flight also brightly spotlights the obstacles and personal consequences women face when sharing their stories of abuse, even now, amid the #MeToo era. It is sad that so much work still needs to be done.

The Last Flight is a compelling, thought-provoking novel that raises important questions and sends an empowering message. It is a solidly written and formidable addition to what is undoubtedly, an overflowing sea of thrillers.

Choose it. Read it. Experience what it means to be a hero unto oneself.