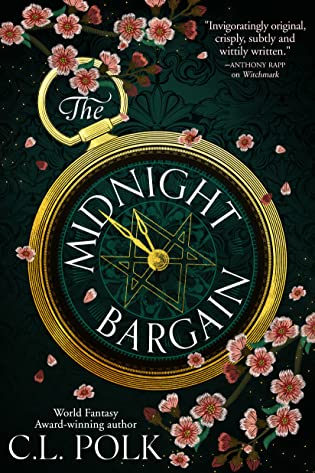 From the beloved World Fantasy Award-winning author of Witchmark comes a sweeping, romantic new fantasy set in a world reminiscent of Regency England, where women’s magic is taken from them when they marry. A sorceress must balance her desire to become the first great female magician against her duty to her family.
Beatrice Clayborn is a sorceress who practices magic in secret, terrified of the day she will be locked into a marital collar that will cut off her powers to protect her unborn children. She dreams of becoming a full-fledged Magus and pursuing magic as her calling as men do, but her family has staked everything to equip her for Bargaining Season, when young men and women of means descend upon the city to negotiate the best marriages. The Clayborns are in severe debt, and only she can save them, by securing an advantageous match before their creditors come calling.
In a stroke of luck, Beatrice finds a grimoire that contains the key to becoming a Magus, but before she can purchase it, a rival sorceress swindles the book right out of her hands. Beatrice summons a spirit to help her get it back, but her new ally exacts a price: Beatrice’s first kiss . . . with her adversary’s brother, the handsome, compassionate, and fabulously wealthy Ianthe Lavan.
The more Beatrice is entangled with the Lavan siblings, the harder her decision becomes: If she casts the spell to become a Magus, she will devastate her family and lose the only man to ever see her for who she is; but if she marries—even for love—she will sacrifice her magic, her identity, and her dreams. But how can she choose just one, knowing she will forever regret the path not taken?

Let’s see if I can build some buzz. (Cracks knuckles.)

C.L. Polk’s latest offering, The Midnight Bargain, is a Young Adult Fantasy Regency Romance that, for some reason, hasn’t received much attention in the bookish community. And the minor attention it has received has been somewhat mixed and unenthusiastic.

But I hope to change all that. I want to give it a little love. Shower a little praise upon it. Because The Midnight Bargain is quite good – and I would be thrilled to see more YA Fantasy fans give it a go.

Beatrice Clayborn dreams of magic and freedom. A talented young sorceress who hides her magical skills, she is torn between her own wants and her sense of responsibility to her family. The Clayborns are nearing financial ruin, and Beatrice, alone, has the means to save them. For Bargaining Season has arrived in Chasland, the time of marriage negotiations, and all she must do is make a financially-beneficial match. With the right husband, Beatrice and the Clayborns will avoid monetary disaster.

But what exactly does marriage mean for Beatrice? It means a life without magic. It means a life spent wearing a marital collar that will stifle her powers in the name of protecting her unborn children. It means a life where she will never become a Magus, as all women are denied that right – even though for men, it is considered the highest of callings.

Desperate to avoid the marital collar, Beatrice devises a plan to save both herself and her family. She will cast the Great Bargaining spell to become a Magus, thereby making herself unmarriageable, and then use her magic to serve as a financial advisor to her family.

But then Beatrice crosses paths and becomes entangled with the Lavan siblings, Ysbeta and Ianthe. Like Beatrice, Ysbeta yearns for a marriage-free life as a Magus, and the two women form a tenuous bond founded on like-minded goals.

Ianthe, however, complicates matters for Beatrice. He stirs her heart in ways she previously thought impossible, and she suddenly finds herself longing to share her life with him. As the pull towards Ianthe intensifies, Beatrice is soon forced to choose between the two greatest passions of her life – magic or Ianthe.

While reading The Midnight Bargain, I was reminded of why I, at the ripe ol’ age of 43, still enjoy YA Fantasy from time to time. The novel is compelling, fast paced, and highly entertaining. It sweeps you away to Chasland, a dazzling world of ballrooms and parties, traditions and courting rituals, and vibrantly-colored fashion.

The novel’s premise, though, is not one that is particularly innovative or new. It’s your typical feministic YA tale of a magical young woman who bucks the unfair constraints imposed upon her by the misogynistic, patriarchal society in which she lives, having to then choose between romantic love or freedom and independence. It’s a very familiar story – yet this one still manages to stand out.

And I think part of the reason for this is Polk’s writing. Her prose is gorgeously elegant and romantic; her words gracefully dance across the page. And her writing style perfectly befits the fantastical version of Regency England she so expertly creates in the novel.

Polk’s world-building of Chasland is also quite formidable for a YA novel, with the exception of one aspect – the magic system. She gives us a clear sense of how magic works for women in this society, but when it comes to the male magicians, the details are noticeably vague and fuzzy. We never receive much of an explanation as to the full extent of their skills and range of abilities, thereby leaving a hole, of sorts, in the world.

Now, on to the love story of Beatrice and Ianthe.

I’m about to be the bearer of bad news. I realize that what I’m about to tell you may be a deal breaker for some of you. It may cause you to do an immediate about face and run far, far away from The Midnight Bargain. But nevertheless, I feel I should tell you that –

Beatrice and Ianthe fall in insta love. (Whew. There, I said it.)

It’s true. Their relationship is flimsily based upon nothing more than this oft-despised trope, and because of it, it is difficult to fully buy into the two of them being all googly-eyed for one another.

But I expected it, going into the novel. I braced myself for it. And when their insta love manifested on the page, I decided to just mindlessly go along for the ride and accept it. Had I not done this, I would not have enjoyed the novel to the extent that I did.

I do wish, too, that Ianthe would have been a stronger romantic lead. He’s a little bland. Dull, even. He’s not nearly dashing or daring enough. He’s also a bit ignorant of the plight of women in Chasland, even though he staunchly believes himself to be a more progressive supporter of their cause. And in some ways, he is of a progressive mind. But he still doesn’t really get it in the beginning, which is annoying.

Beatrice, on the other hand, is a fantastic character. She’s fiery and brave. Fierce and independent. She unapologetically fights for control of her life and for what is right, refusing to back down. Some may say her actions are those of a selfish woman, but I firmly disagree. Beatrice is not the selfish one in this story – society and her family are selfish. For what right does society or the Claypools have to force her to live her life a certain way? To force her to marry and birth children if it is not her desire? And is it not also appallingly unfair of her family to even place the financial burden on Beatrice’s shoulders in the first place? To make her pay for and fix their mistakes? How it infuriates me, just to think of it.

But that’s the feminist in me talking. I will shush her for now and say no more.

No more, that is, apart from this – I absolutely adored The Midnight Bargain. Really. Truly. Please read it.

And again, try not to focus too much on the insta love. I fear the novel will not work for you if you do.

Perhaps we should just be grateful. At least there isn’t a love triangle, too.

My sincerest appreciation to Erewhon and Edelweiss+ for the Advance Review Copy. All opinions included herein are my own.