The Testaments (The Handmaid’s Tale, #2) 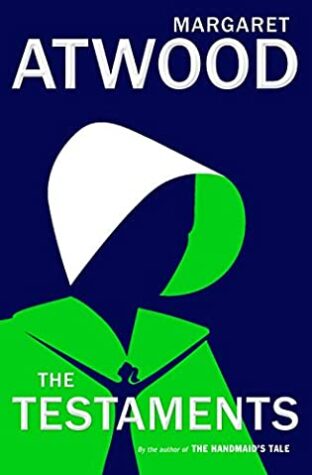 The Testaments (The Handmaid's Tale, #2) by Margaret Atwood
Published by Nan A. Talese on September 10, 2019
Pages: 419
View Title on Goodreads
Bantering Books Rating:

Fifteen years after the events of The Handmaid’s Tale, the theocratic regime of the Republic of Gilead maintains its grip on power, but there are signs it is beginning to rot from within.
At this crucial moment, the lives of three radically different women converge, with potentially explosive results. Two have grown up on opposite sides of the border: one in Gilead as the privileged daughter of an important Commander, and one in Canada, where she marches in anti-Gilead protests and watches news of its horrors on TV. The testimonies of these two young women, part of the first generation to come of age in the new order, are braided with a third voice: that of one of the regime's enforcers, a woman who wields power through the ruthless accumulation and deployment of secrets. Long-buried secrets are what finally bring these three together, forcing each of them to come to terms with who she is and how far she will go for what she believes. As Atwood unfolds the stories of the women of The Testaments, she opens up our view of the innermost workings of Gilead in a triumphant blend of riveting suspense, blazing wit, and virtuosic world-building.

The Handmaid’s Tale is a modern classic. It is an important novel. It is a novel that I believe should be read by every woman at least once in her lifetime.

I hold it in the utmost regard, as I do Margaret Atwood. I marvel at her wisdom. I admire her intelligence. I wonder at her writing.

Because of my own personal appreciation for Atwood and The Handmaid’s Tale, I have delayed reading The Testaments. I have not wanted to be disappointed, even though deep down I knew it would be inevitable, to some extent. Because how could Atwood write a follow-up that could even compare to the brilliance of the original?

Many of the critics of this novel (and there have been MANY) feel that Atwood should never have ventured back into the world of Gilead. They strongly believe that the ambiguous ending of The Handmaid’s Tale is perfection and should not have been touched. To be fair, I don’t entirely disagree with this sentiment. I love the ending, as well, and have always felt satisfied with it.

But I am not one to ever bite the hand that feeds me. More Gilead? Please and thank you.

So, it was with realistically adjusted expectations that I read The Testaments. I crossed my fingers, held my breath, and hoped that I would at least like the novel.

And I did like it. I enjoyed The Testaments immensely. My worry was needless.

I do believe The Handmaid’s Tale will forever be the superior of the two novels, but without a doubt, Atwood has given us a worthy sequel.

Set fifteen years after the closing scene of The Handmaid’s Tale, with the totalitarian patriarchal theocracy of the Republic of Gilead still standing, the story of The Testaments is told through the viewpoints of three different women. Two of the three women are teenagers – Agnes, the daughter of a Commander in Gilead, and Daisy, a young woman living in Canada who witnesses the terrors of Gilead from afar. The third point of view is that of the infamous Aunt Lydia, inarguably the most influential, merciless woman in Gilead.

The lives of the three women eventually intertwine, as they each discover the extent of all they are willing to sacrifice in order to right the world.

Of the three viewpoints, Aunt Lydia is, by far, the most compelling voice. The chapters devoted to her are riveting. Through her secret writings, we are treated to an in-depth glimpse of the earlier fall of the United States and the methods used to capture and then convert the women to the belief system of the Sons of Jacob, the founders of the new world. We are also privy to the inner workings of Gilead and the machinations of both its male and female leadership.

The testimonies of Agnes and Daisy, while mostly interesting, do seem to pale in comparison to that of Aunt Lydia. It is clear who is the true star of the story.

But all three narrative threads succeed in one regard — the personal stories of Aunt Lydia, Agnes, and Daisy will make you angry. The physical, emotional, and sexual abuse that is doled out by the society of Gilead is horrifying. (Sensitive readers, beware.) I felt that old, familiar anger returning while reading The Testaments. The exact same anger The Handmaid’s Tale instilled in me. An anger that has never fully dissipated.

An anger that, I think, speaks to the power of Atwood’s writing and the memorable world of Gilead that she has created.

I feel I should warn that The Testaments will likely not answer all the lingering questions you may have from The Handmaid’s Tale. Atwood leaves us with a vague understanding of the remainder of Offred’s life, but there are still many gaps left for our imaginations to fill. We must make peace with that fact.

But this time, even though we may not have all the answers we desire, we at least have hope. Atwood closes the novel on a much more optimistic note than she did in The Handmaid’s Tale. And once again, the ending feels so very satisfying.

For hope is beneficial to us all.