To Tell You the Truth 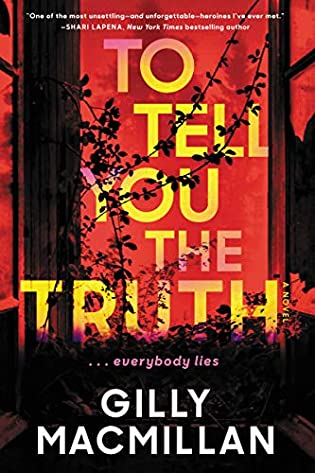 To Tell You the Truth by Gilly Macmillan
Published by William Morrow on September 22, 2020
Pages: 384
View Title on Goodreads
Bantering Books Rating:

Bestselling mystery writer Lucy Harper’s talent for invention has given her fame, fortune, and an army of adoring readers. It has also saddled her with dependents, namely her fawning husband Dan.
When Dan suddenly goes missing, his disappearance evokes dark memories that take Lucy back more than thirty years—to the day her brother vanished without a trace. That’s when Lucy began conjuring stories. The police investigation revealed few confirmed details, so she created tales to fill in the gaps, to explain what happened that day her brother disappeared—and young Lucy was the only witness.
Now decades later, with the whole watching, Lucy’s past and present are colliding, and this bestselling author skilled in telling stories is losing control her own narrative.
Where is Dan? What happened to Lucy's brother? And is the brilliant mystery writer—an expert in devising red herrings and hidden clues—revealing all she knows about both disappearances?
With twists and turns that lead all the way back to World War II, Gilly Macmillan reveals the answers in this clever and compulsively readable mystery sure to thrill fans of  Liv Constantine and Shari LaPena.

I love a good unreliable narrator.

If written well, an unreliable narrator adds an element of excitement to a novel. An extra layer of mystery and suspense. A touch of madness. It forces us, as readers, to think complexly, connect puzzle pieces, and draw independent conclusions. Our minds are put to work, so to speak.

And if you enjoy the challenge of an unreliable narrator as much as I do, then Gilly Macmillan’s latest mystery, To Tell You the Truth, may be just the book for you.

Lucy Harper, a bestselling mystery author, has a successful writing career and scores of admiring fans. Under the resentful gaze of Dan, her husband and a fellow writer, Lucy is hard at work putting the finishing touches on the next installment in her widely popular series of DS Eliza Grey crime novels.

When Dan shockingly vanishes one night, memories of another disappearance slowly surface for Lucy. Memories from over thirty years ago. Memories of the disappearance of her little brother, Teddy. Having never been found, the loss of Teddy incessantly haunts Lucy – especially since, as a young girl, she was the only witness to the crime.

Finding herself suspected of harming Dan, Lucy races to solve both his disappearance and that of Teddy. All while bravely reconciling the harsh realities of the present with her tormented memories of the past.

For starters, To Tell You the Truth far exceeded my expectations. Having never read a Macmillan novel, I had no idea I was in for such a terrific read. She has crafted a mystery that is extremely compelling and atmospheric. It is tense and riveting.

The novel is comprised of two separate narrative arcs – the present-day disappearance of Dan and the past disappearance of Teddy. Most of the novel focuses on Lucy and her plight to find Dan, but there are occasional, short chapters interspersed throughout that are dedicated to the night Teddy vanishes. The independent, rotating storylines work effectively, with both the past and present narratives being equally captivating.

And Macmillan’s writing is undoubtedly impressive. Her prose is polished. Intelligent. All signs indicate that Macmillan is an experienced and gifted author.

She keeps you on your toes, too. The reader is always left guessing, forever unsure of which direction the novel is headed. Macmillan never shows more than a fleeting glimpse of the cards in her hand, which makes it tricky, if not nearly impossible, to solve either of the two core mysteries.

I must point out, though, that the general, overarching plot of To Tell You the Truth rings a bit familiar. The story is not anything groundbreaking or new, and it is amply filled with many of the tropes that are typical of the genre. The solid writing and enthralling nature of the novel, however, make it easy to overlook the rather basic, recycled plot.

Also, Lucy helps. Plot mediocrity is quickly forgotten once you are immersed in her fascinating mind. She is the classic unreliable narrator, simultaneously frustrating and intriguing. Her sanity and emotional stability are questionable. She is dishonest, misleading, and secretive. One minute, she’s as strong as a lion. The next, she’s timid as a mouse. And she emits this pervasive aura of paranoia, which dually heightens the novel’s tension and blurs the edges of the truth.

Lucy makes for some fun reading. To be sure.

The only true criticism I have for the novel concerns the ending. Though completely unexpected, the solution to one of the mysteries is almost too surprising and random. While some readers may appreciate the ending for the simple fact that it is so startling, I found its lack of connection to either the past or present storyline to be jarring and, in some ways, nonsensical.

With To Tell You the Truth being my first Macmillan novel, I am unable to gauge how well it stacks up to her previous mysteries. But I do know that overall –

It is smart. It is gripping. It is highly entertaining.

And it will certainly not be the last novel I read by Gilly Macmillan.

My sincerest appreciation to William Morrow and NetGalley for the Advance Review Copy. All opinions included herein are my own.